While you may send off the delivery person carrying your precious online orders with a grateful smile, you probably don’t spare a thought about how he managed to deliver your stuff. Facebook user Saurabh Trivedi noticed how the delivery person from Big Basket, who came to his home, was carrying a huge heavy bag on his shoulders. He marked the online grocery and food products provider along with a few pictures on May 25.

In the post, Trivedi highlighted the inhuman condition in which most delivery persons are made to operate. “The guy was literally bending forward due to the heavy weight of the order he was carrying on his back,” he wrote.

He further added that the delivery boy, who didn’t want to be named due to the fear of losing his job, said that Big Basket pays them on the basis of the number of orders that they deliver in a day. It does not provide any assistance to improve their working conditions.

The Facebook post went viral on social media and at the time of writing had been shared over 30,000 times. Many users expressed their outrage and sought action against the company. 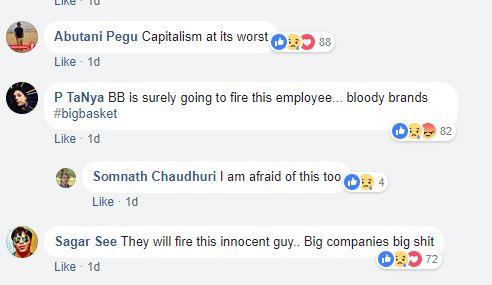 Big Basket responded to the outrage and said that they will introduce new designs of bags and crates that will ease the burden of delivery boys. They replied, “We are constantly working on the designs and are piloting in few cities, with new system we are confident that the load of our delivery person will reduce significantly, as the box would be mounted on the bike and the crates will be replaced with bags, where the products will be carried. Very soon the process will be implemented across all the cities. Attaching picture for reference.

When InUth reached out to Big Basket, an official directed us to a Facebook post by the Chief Customer Experience Officer KB Nagaraju. “Our process does not allow a delivery boy to take a load in excess of 15 kilograms. As soon as an order for a route exceeds 15 kilograms in weight, it is split into two routes by our route optimization software. Orders will be delivered by two bikers. However, there have been some rare exceptions where in a misplaced sense of commitment to on-time delivery, the order allocator has assigned a load of more than 15 kilograms,” he wrote, adding that the violations are usually picked up by during audits and stringent action is taken.

He also wrote that the main reason for the bigger bags is that they used crates to pack orders that minimize damage to products during transit, “but makes life a little more difficult for the delivery boys.” He assured that a team is working to make sure that carrying a bag on the back would no longer be required.