Lal Bahadur Shastri became India’s Prime Minister after the death of Pandit Jawaharlal Nehru in 1964. He took over when the country was going through economic hardships in the wake of 1962 Indo-China War. Barely a year after taking over the office, he faced the biggest challenge when Pakistan, under General Ayub Khan, attacked India. Shastri gave the slogan ‘Jai Jawan Jai Kisan’ and led India to a successful military campaign in the war. India and Pakistan signed a ceasefire agreement on June 30, 1965. Both Lal Bahadur Shastri and General Ayub Khan met in Tashkent on January 10, to sign an agreement declaring that both sides will exert all forces to ensure good relations with each other. However, hours after signing the agreement, Shastri passed away all of a sudden. While the doctors claimed that the Prime Minister suffered multiple heart attacks, his death continues to remain a mystery.

Veteran journalist Kuldip Nayar had accompanied Shastri to Tashkent as his advisor. In his book, he narrated the events that transpired on January 11, 1966. Nayar said he was woken up in the middle of the night by a Russian lady who uttered the word,”Your prime minister is dying.” He got ready and drove to Shastri’s dacha that was a distance away from Kuldip’s guesthouse. When he reached the verandah, Soviet Prime Minister Alexei Kosygin raised his hand signalling that Shastri was no more. 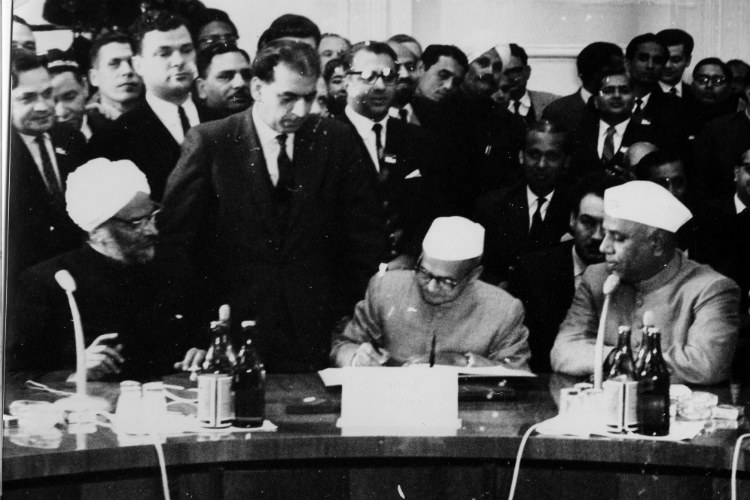 In his book, Nayar wrote:

Behind the verandah was the dining room where a team of doctors was sitting at an oblong table, cross-examining Dr R.N. Chugh who had accompanied Shastri.
Next to it was Shastri’s room. It was extraordinarily large. On the huge bed, his body looked like a dot on a drawing board. His slippers were neatly placed on the carpeted floor. He had not used them. In a corner of the room, however, on a dressing table, there was an overturned thermos flask. It appeared that Shastri had struggled to open it. There was no buzzer in his room, the point on which the government lied when attacked in Parliament on its failure to save Shastri’s life.

In 2015, Nayar in an interview to News18 expressed that no post-mortem was conducted following his death. 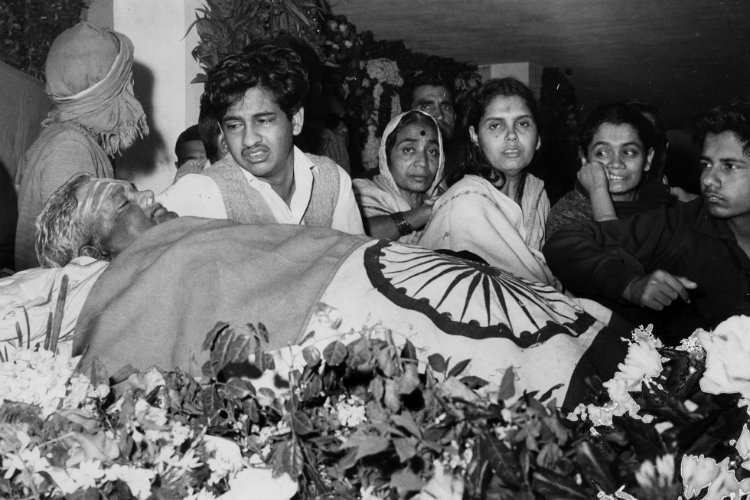 In 1996, Robert Trumbull Crowley, a former CIA operative claimed that it was the US intelligence agency that was behind Shastri’s death. The revelations came in an interview to a journalist Gregory Douglas in the latter’s book Conversations With The Crow.

And we nailed Shastri as well. Another cow-loving raghead. Gregory, you say you don’t know about these people. Believe me, they were close to getting a bomb and so what if they nuked their deadly Paki enemies?” 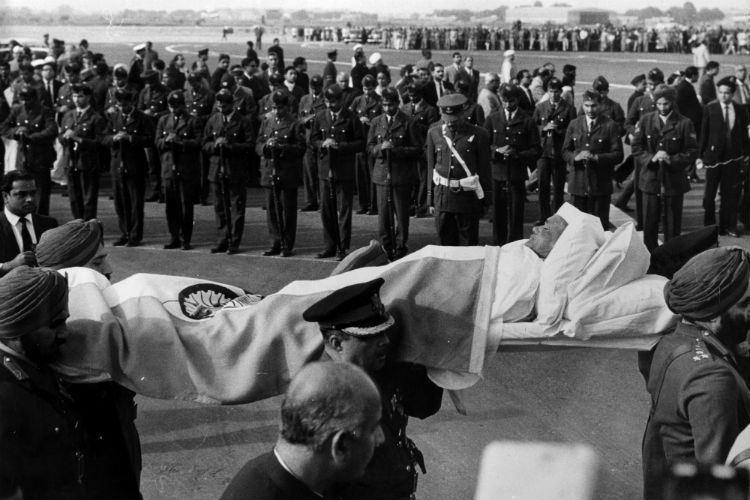 The body of Prime Minister Lal Bahadur Shastri carried by Pall bearers to the gun carriage after arrival aPalam Airport on 11.01.1966 while the Inter-services guards of honour rest with arms reversed. (Photo: Express)

In 1970, the former Prime Minister’s wife Lalita Shastri asked for a probe into his death. The family was upset that Jan Mohammad, the chef of the Indian ambassador to Russia, TN Kaul, had cooked the food and not the Prime Minister’s personal servant Ram Nath. In fact, he along with physician RN Chugh were supposed to appear before a parliamentary panel in 1977. But the doctor along with his wife and two sons were crushed by a truck. On the other hand, Ram Nath was hit by a car and lost his memory.

In 2009, the Prime Minister’s Office (PMO) received an RTI query seeking declassification of documents related to Shastri’s death. Surprisingly, the PMO claimed that there was only one document pertaining to the case that could not be revealed due to security reasons.