A group of north Indian students at an engineering college in Kerala’s Kuttanand filed a complaint with the district collector on Saturday alleging they were deliberately served beef cutlets at a seminar.

The incident took place on January 25 at a seminar on digital banking at Cochin University College of Engineering Kuttanad (CUCEK) where the complainants were misled into eating beef cutlet. They were allegedly told that it was vegetable cutlet.

Speaking with Times of India, S Vishwatna, a second-year student from Bihar, said, “I asked the server multiple times if it was a vegetable cutlet. However, when I took a bite, I realized that there was meat in it.”

He claimed it was his Malayali classmates who later confirmed that all of these were beef cutlets.

Angith kumar and Himashu kumar, two other complainants, alleged the college authorities told them that it was vegetable cutlets when repeatedly asked whether it was beef or veg, which was when they proceeded to eat them, PTI reported.

The students said they felt depressed on coming to know that they ate beef as it was a matter related their faith and religion.

Accusing the principal of hurting their religious sentiments, the complainant said, he purposefully misled the students into eating beef as punishment for organizing procession and Saraswati puja at the college, which he had not permitted.

“Angered by the fact that we successfully celebrated the festival, he targeted a first-year CSE student, Mayank Shekhar and suspended him for no obvious reasons,” he added. 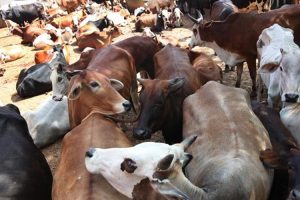 College principal Sunilkumar, however, dismissed student’s claims saying, he holds no malice against them.

Speaking with News18, the principal said that he had given permission to conduct Saraswathi Pooja but on condition that no classes would be disrupted like it has been happening for the past several years.

Speaking on his action against organisers of procession during Saraswati Puja, he said, “I had given them the permission to organize the puja, like previous years, during lunch break. ABVP had also organized a protest on the same day. I told them if you want to cancel class and hold the protest, then don’t conduct the puja.”

However, the students defied his instructions and held a procession. They came, with loudspeakers, to the campus around 1:30pm, which prompted the principal to  suspend one of the students.

Meanwhile, district collector T V Anupama said that the matter is being looked into and they are yet to find anything that indicates the involvement of the principal.