On his 72nd birth anniversary, Indian National Congress paid tributes to Sanjay Gandhi, calling him a “visionary and strong advocate of the poor”. Now this is getting the goat of many who feel that Congress party is honouring the memories of a Gandhi who is best remembered for wreaking havoc upon India through emergency.

Today we honour Shri Sanjay Gandhi on his birth anniversary. A visionary leader, a strong advocate for the poor & a great believer in the power of technology. pic.twitter.com/HvDkPHYuqN

Even 38 years after death, Sanjay Gandhi’s name evokes mixed feelings.. His admirers remember him as a leader who preferred action over words while his detractors discern him as a pampered son with a dictatorial attitude.

During emergency, Sanjay became an unelected political centre of absolute power, all thanks to his proximity with his mother. In fact, the Gandhi scion was blamed for many of the excesses of Indira Gandhi’s 21 months of autocratic emergency rule.

Gandhi was also blamed for orchestrating the notorious sterilisation programme under the garb of family planning. Authorities were asked to forcibly perform vasectomies on men and also sterilise some women. Gandhi reportedly asked the chief ministers to show progress in the family planning programme who ended up setting their own targets and their own achievements on paper, cooking up statistics. There were reports of police cordoning off villages and virtually dragging the men to surgery.

As many as 6.2 million people were sterilised in just a year, which was “15 times the number of people sterilised by the Nazis”, according to science journalist Mara Hvistendahl. Nearly 2000 died as a result of botched operations.

During emergnecy UP’s Muzaffarnagar  witnessed another bloodbath when 25 people reportedly protesting against forced sterilisation were killed in a police firing. Gandhi’s slum clearance projects was another ill-thought idea which had left thousands of poor homeless. 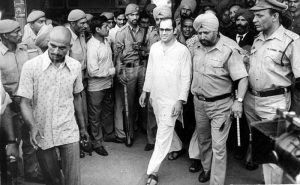 Political leader Sanjay Gandhi being taken away by Police at New Courts in Delhi in 1978. Express archive photo

The bloodiest instance of displacement happened at Delhi’s Turkman gate, a shanty largely inhabited by Muslims.On April 19,1976, police opened fire at a group of protesters resisting the demolition. There is no official account of the number of people who died in police firing that day, nor of how many were displaced. Figures differ from a few dozens to a few hundreds as per different accounts.
“Within a mere 21 months, an estimated 70,000 people were displaced from slums and commercial properties in large areas of old Delhi,” according to Emma Tarlo’s book Unsettling Memories: Narratives of the Emergency in Delhi.

Later, a two-member fact-finding committee of R C Jain and D K Agarwal said Mrs Gandhi chose to ignore all complaints she had received about excesses committed by the authorities. The committee also observed that Sanjay Gandhi was responsible for a number of illegal demolitions.

Reminiscing the emergency excesses, noted journalist Vinod Mehta wrote in  The Sanjay Story : “Initially people were rounded up in trucks, taken across the Jamuna and dropped into desolation – in land that was as bald as a tennis ball… At night [they] slept under the stars in the comforting knowledge that at least the bulldozers were far away.”

In the power circle, Sanjay was not only believed to be a dominating force in the party but in the family as well. He is often said to have prevailed over her mother. A Washington Post report even claimed that Sanjay Gandhi had  slapped Indira Gandhi at a dinner party. Even as no Indian newspaper reported the story, it spread like “wildfire through word of mouth”. Pulitzer Prize-winning journalist Lewis M Simons told scroll.com that he still stands by the story claiming that his sources’ reliability was, and remains, impeccable.

When Indira Gandhi decided to call off emergency, Sanjay strongly resisted the move, with Parliament to be replaced by a constituent assembly that would switch to a presidential system. Interestingly, his followers in the state legislatures of Haryana, Punjab and Uttar Pradesh had passed resolutions to that effect.