You know the gender discourse in the country is headed in the right direction when you see a male Parliamentarian taking up issues like menstrual hygiene and menstrual leaves during Questions Hour. Lok Sabha MP from Arunachal Pradesh Ninong Ering has introduced a Private Member’s bill drawing attention of the Lower House to the need for menstrual leave for working women.  Ering, 59,  was continually confronted with the issue on various platforms – be it in real life conversations or on online forums. That’s when he decided to bring up the issue in Parliament.  His attempts at this began with an unstarred question directed at Women and Child Welfare Minister Maneka Gandhi. He asked if the Ministry had any plans of making menstrual leaves mandatory.

In its reply, the Ministry of Women and Child Development said that it had no such plans while adding that it does distribute free sanitary pads for adolescent girls. Ering continued his efforts by moving a Private Member’s bill on menstrual leave. The bill proposes two day leave for menstruating women working in both public and private sectors.

Speaking to inUth, he said: “By itself a Private Member’s bill may not mean much. Let’s see when it is taken up for discussion. But this would help push this agenda a little further and we might end up having a law making menstrual leaves mandatory.”

Read more: Dia Mirza doesn’t use sanitary napkins, and her reason should be a wake-up call for all of us

In July 2017, Culture Machine, a media company sparked off a debate after it allowed its female employees to take the first day of their periods off. In a video message, the female staff of the company said:

“It’s no secret that period cramps are the worst, but over the years women have had to show up at work and mask their pain with silly excuses.”

At the heart of Ering’s attempt is the same argument, “why must women make excuses for an off when they are menstruating and are not comfortable working.”

This bill, just like Culture Machine’s move has attracted criticism, particularly from women.

Deepika Bhardwaj, independent journalist and known for being the only woman “men’s rights activist” had this to say: 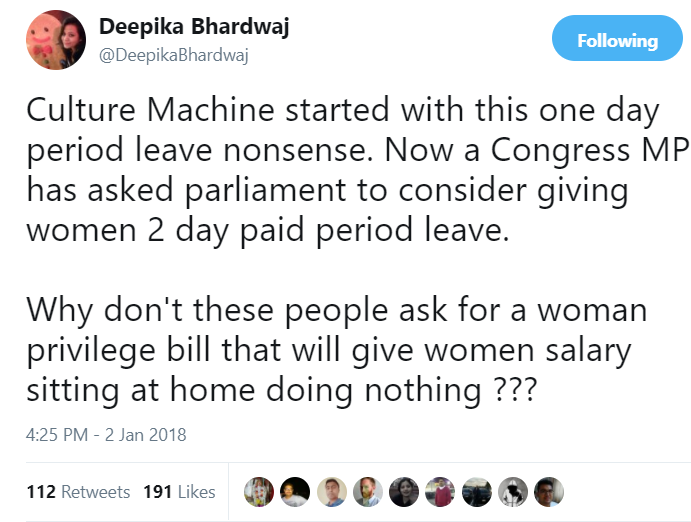 While Deepika’s tweet was shared by many, the argument seems a little misplaced for the two fights — a woman’s right not to be considered impure during the time she is menstruating and her right to stay at home when menstrual cramps become too much to bear —  are completely unrelated.

The tweet discounts the fact that for some women period pain can be excruciating. In 2016, John Guillebaud, professor of reproductive health at University College London had made some shocking revelations about period pain. He said, menstrual cramps can be as bad as a heart attack. Several international newspapers quoted him as saying:

Men don’t get it and it hasn’t been given the centrality it should have. I do believe it’s something that should be taken care of, like anything else in medicine.”

Many believe that such a move might endanger a woman’s job prospects.

Look at this exchange, for example. 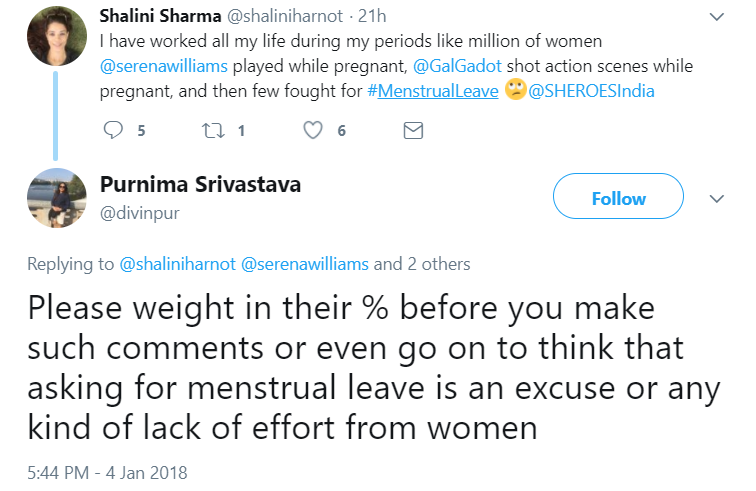 When told about these arguments doing the rounds, Ering says: “My cousin sister has herself raised these issues. She also questioned the need for menstrual leave. Back in northeast, women are quite open about these things, there are no menstrual taboos or they are not even ashamed of talking about it with men. However, it’s a fact that many women find it difficult to talk about it. It’s a matter of acknowledgement. So many women find it difficult to convey to their male bosses that they are menstruating and hence they need to leave early, or that they might find it difficult to do a particular task. Such a legal provision will not only make things easier for women, it also sensitize men about a woman’s condition.”

Many might debate the pros and cons of such a proposal. Also, the bill may not translate into a law any time soon.  But the fact that male Parliamentarians are taking up such issues reassures us that creating a gender equal world might not be an impossible goal, after all.