Congress chief Sonia Gandhi’s son-in-law Robert Vadra on Monday applauded the Supreme Court for its order banning the sale of liquor near national and state highways. Having lost his own sister in a road accident, Vadra said the order is a huge step towards road safety.

“The SC order banning the sale of liquor near national & state highways is worthy of respect and commendation. It will be a big step forward towards road safety. Having lost my own sister (she was just 33) in an unfortunate accident caused by callousness towards safety norms on the roads, I fully endorse the shutting of liquor vends along the highways.

He also acknowledged that the decision will adversely impact the hospitality industry, as well as a million employees might have to face the brunt. “Some respectable establishments might be adversely affected while having a record of adhering to rules and not allowing patrons/ customers to exceed limits of consumption. The hospitality industry will be hit badly and I believe approximately 1 million employees might be affected,” he wrote in a post on Facebook.

Robert’s sister Michelle had died in a road accident on the Delhi-Jaipur highway in April 2001. 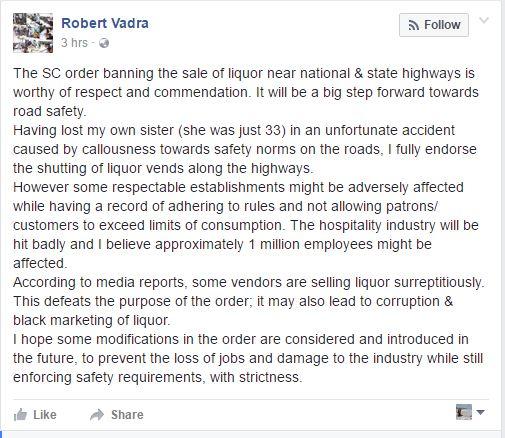 The apex court has directed that no liquor shop shall be visible and directly accessible from the highways nor it should be situated within 500 metres of the outer edge of the national or state highway or of the service lane.

As per the top court’s order, licences of existing liquor shops on national and state highways will not be renewed after March 31. The SC bench had expressed displeasure over the alleged inaction by various states in removing liquor shops along the roads which give rise to drunken driving and consequential fatalities.

In its order on December 15 last year, the SC had noted, “The expressways witnessed 4,208 accident cases, 4,229 injured and 1,802 deaths. Figures are also available of the distribution of road accidents by causes during 2014. 1.38 lakh persons were injured in road accidents involving dangerous or careless driving and 42,127 deaths occurred.”

“Injuries caused in accidents due to over-speeding stood at 1.81 lakh while there were 48,654 deaths. 7,307 accident cases involving driving under the influence of drugs/alcohol were registered resulting in 7,398 injuries and 2,591 deaths,” it had noted.