Temples, churches, gurudwaras and most religious places across the country are helping people face the cash crush situation by opening their donation boxes and distributing money to those in need.

## 1. In a respite to many who came to the church on Sunday, the St Martin Syro Malabar Church in Thevakkal in suburban Kochi opened its offering box, or offertory, containing small-denomination currency for the people who are dealing with the liquidity crisis. The church said that the box has been opened for people to meet their daily needs. The church added that it was confident that people would return the money when they get over the crisis.

## 2. A gurudwara also broke the donation box and distributed petty cash to people to manage the day to day expenses.

## 4. Vinayka Hospital and Research Centre, a private hospital in Ranchi treated patients for free between 10-13 November.

## 5. A hotel on National Highway 6 near Akola in Maharashtra is offering free food to tourist families who are affected by demonetisation. A banner has been put up outside Maratha Hotel in Akola by its owner Murlidhar Raut. 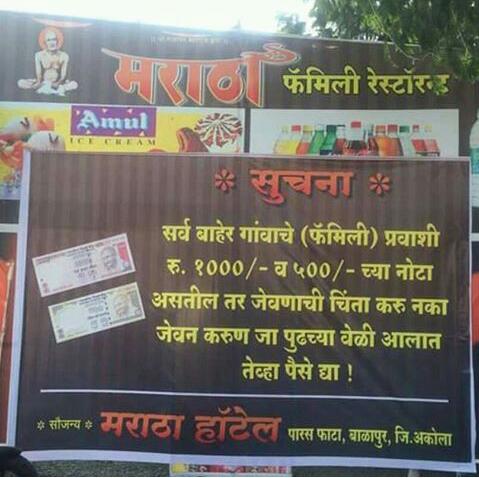 In times of difficulties, it is these acts of compassion which win the hearts. Let us all do out bit by helping people move over the cash crunch.