We all saw the ‘disastrous’ moment when Hardik Pandya got run out during the final match of the ICC Champions Trophy between India and Pakistan. Panday got out when all the main batsmen of the Indian cricket team had went back to the pavilion in the early overs and everyone thought the match was over. However, it was Hardik Pandya who gave Indian fans a sigh of relief by smashing 76 runs off just 43 balls.

Hardik Pandya was the sole batsman in yesterday’s game, who fought like a warrior alone and made everyone sit for the match again. But all his efforts went in vain when Hardik too had to return pavilion for the mistake of Ravindra Jadeja.

Soon after he was out and returned in super angry mode, a screengrab of a particular tweet claiming to be from Pandya’s official account went viral on social media.

A user named @vanillawallah photoshopped a tweet and said that it was Hardik Pandya’s. Surprisingly, his caption read, “Hardik Pandya tweeted this and then deleted it. I am dead.” 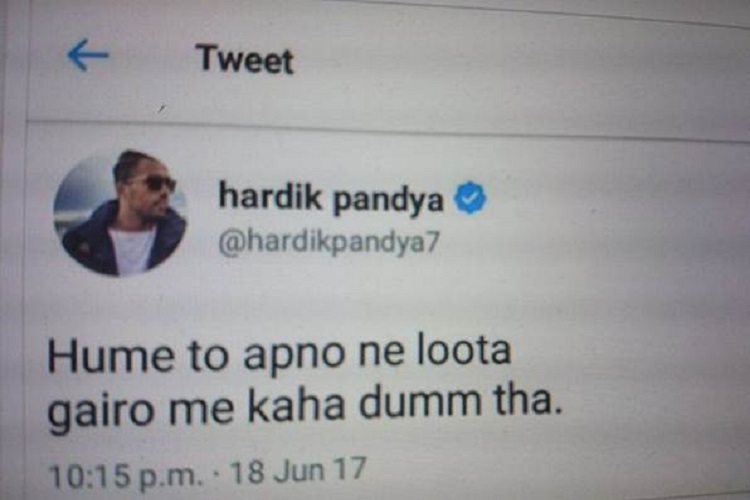 Many people believed that the cricketer had actually posted this and fell for it, but the truth was something else. Hardik  didn’t post any of such tweet. Basically, that Twitter user had used F12 i.e. a key which can be used to fetch developer tool in Google Chrome bar, which allows to edit the tweet.

Hardik Pandya had actually tweeted this:

#CT17 was an incredible journey for #TeamIndia. We gave it our best. A complete team__effort.
Thank you everyone for the messages & support. pic.twitter.com/Ti4oJOYTkU

He was angry with jadeja. He came on the field for winning. But then… we all knw wt hpnd r8? His expression said it all

Interestingly, Hardik Pandya took the matter into his own hands after the fake tweet and gave a strong reply to the user. Here’s what he said: 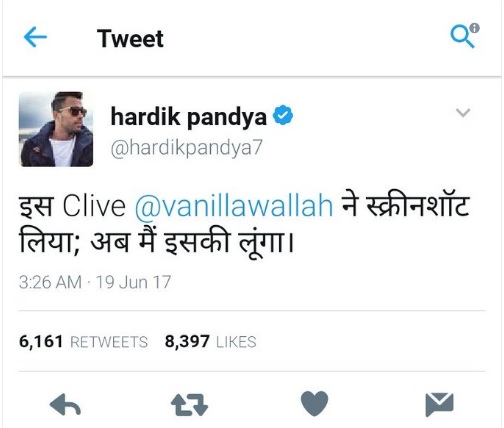