While releasing a book on Indira Gandhi’s life ‘India’s Indira – A Centennial Tribute’ on May 13, the President said, ‘Indira Gandhi was one of the remarkable personalities of the 20th century all over the world. And to the people of India, even today after her passing away, she is the most acceptable ruler or prime minister of a democratic country.’

The Congress is celebrating the birth centenary of Indira Gandhi.

The book is edited by senior Congress leader Anand Sharma. It is a compilation of life and work of Indira Gandhi and its foreword is written by Congress President Sonia Gandhi. 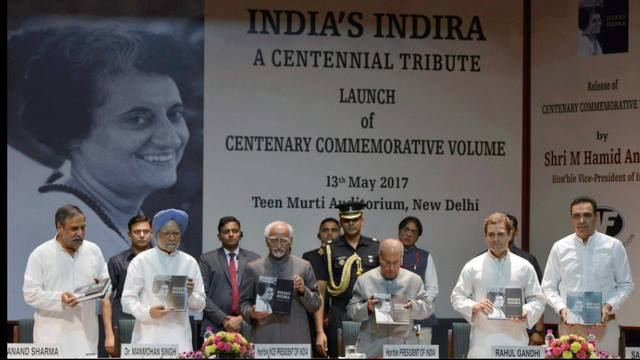 Pranab Mukherjee also hailed Indira Gandhi for her fearless actions. He said her entire life was infused with a tremendous passion for India and its people.

“Fearlessness in action and boldness in decision-making was the unique hallmark of Indiraji’s character. Indiraji waged throughout her life a relentless war against communal and sectarian violence,” the President further added.

Pranab Mukherjee also recalled a series of bold decisions Gandhi took in the interest of the country, laying special emphasis to her decision to cleanse Golden Temple of militants, which he termed as the “most dangerous”.

“As a student of history I was afraid to do anything with the Golden Temple. And as member of the then CCPA I told at the meeting that perhaps the most dangerous decisions we are taking,” he said referring to Operation Bluestar in 1984.”