Amid persistent threats of violence from self-proclaimed Rajput leaders over release of Padmavati, senior TV journalists Rajat Sharma and Arnab Goswami have come out in support of Sanjay Leela Bhansali directorial.

A special screening was arranged for a few journalists by the producers to clear the air over the content of the film that was said to have hurt the Rajput pride. Lending his support to Padmavati, Arnab called Deepika Padukone starrer the ‘greatest ever tribute to Rajput pride’.

He said that every scene of this film is a cinematic tribute to Rani Padmavati adding that Karni Sena and “their vandalism will be called politically sponsored” post the release of the film. “The BJP should really reconsider the prospect of embarrassing themselves by joining the Karni Sena side,” he added.

India TV editor in chief Rajat Sharma also declared that there was no distortion of history in the film, and that Bhansali had “kept in mind the need to respect the Rajput traditions and etiquette”.

“After watching the entire film, I can emphatically say that there is not a single dialogue, not a single scene, not a single sequence that can be said to go against the proud history of the Rajputs of Rajasthan,” he said on his primetime show Aaj Ki Baat.

Speaking on the controversy over Ghoomar song, Sharma said, “I hail from Rajasthan, and I am well aware of Rajput tradition and culture”. “I know that Rajput queens do not dance in public, but everybody would agree with me that queens and princesses do dance in the female quarters,” he quipped.

Meanwhile, the makers of the film took a swipe at CBFC for “looking the other way” while they “have to run around and show it at other forums”.

“What an irony, those who are supposed to watch are looking the other way and we have to run around and show it at other forums to ‘clear’ it.” 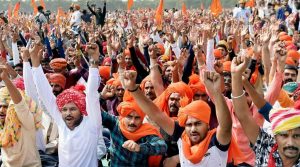 The CBFC has sent “Padmavati” back to the makers as the application for the certification was “incomplete”. According to the CBFC, the movie, which has triggered protests by several Rajput groups, will be reviewed as per the set norms once it is sent back to the board after sorting out the issue.

Fringe elements have scaled up protest against the release of the film. Karni Sena, whose members attacked the director in January, have now threatened to maim the film’s lead actor, Deepika Padukone. A Rajput community in Meerut has also announced a bounty of Rs 5 crore on the filmmaker’s head.