Assassinations do not only incur a personal loss to the kin of the deceased but also have the capacity to change the course of history. The gruesome assassinations of American presidents Abraham Lincoln and John F Kennedy created shockwaves over the world. Five months after independence, Mahatma Gandhi was shot dead by Nathuram Godse on January 30, 1948, which pulled down the entire country into a state of mourning. However, the country of one billion people would have to cope with more gruesome killings of important politicians in the coming years. Here are 10 such politicians who were assassinated:

Mahatma Gandhi: Also known as Father of the Nation, Mohandas Karamchand Gandhi was shot at Birla House (now called Gandhi Smriti) in New Delhi on January 30, 1948. According to reports, Nathuram Godse shot him thrice in the chest at point-blank range with a semi-automatic pistol. Gandhi was shot at 5.12 pm and succumbed to the bullets. His assassin and accomplice Narayan Apte were hanged till death. On the other hand, six other conspirators including Godse’s brother Gopal were handed life imprisonment. During independence, India was in the midst of gruesome Hindu-Muslim riots and Gandhi was trying his level best to infuse peace in the country. According to historians, Godse told the court that he fired at the person whose “policy had brought rack and ruin and destruction to millions of Hindus.” Here’s the assassination scene from Richard Attenborough’s Academy Award-winning film Gandhi.

Indira Gandhi: India’s first woman prime minister Indira Gandhi was shot dead by two of her bodyguards at her residence in Safdarjung Road on October 31, 1984. Satwant Singh and Beant Singh fired 33 bullets at her, out of which 23 bullets passed through her body. Her bodyguards fired at her in protest against the June 7 Operation Bluestar conducted by the Indian Army on her directive inside Amritsar’s Golden Temple that year. The former PM was taken to the All India Institute of Medical Sciences (AIIMS) wherein doctors operated on her, but she succumbed to the injuries in the afternoon. Soon after her death, anti-Sikh riots took place in the national capital and other parts of the country in which more than 3,000 Sikhs were killed. The news about her death was reported by British Broadcasting Corporation at 9’o clock that day. Here’s the video.

Also read: Why is Khalistan movement back in news and who is Harminder Singh Mintoo?

Rajiv Gandhi: Soon after Indira Gandhi’s assassination, her elder son Rajiv Gandhi was sworn in as the PM. He led the Congress to an astounding majority of 404 seats in the Lok Sabha elections attributing to the sympathy wave. However, his tenure was not a smooth ride with certain decisions yielding severe repercussions. Gandhi’s decision to send the Indian Peace Keeping Force (IPKF) to Sri Lanka not only backfired but also cost him his life. On May 21, 1991, he was assassinated in a suicide bombing attack at Sriperumbudur near Chennai. Thenmazhi Rajaratnam, also known as Dhanu, approached him to felicitate him with a garland. As soon as she bent down to touch his feet, Dhanu activated the button of the explosive-laden vest that she had worn underneath her clothes. Velupillai Prabhakaran-led Liberation Tigers of Tamil Eelam (LTTE), a terrorist group in Sri Lanka was named the prime suspect in the killings.

In 1998, a TADA court sentenced 26 people to death in connection with the case. A year later, the Supreme Court upheld the capital punishment for four accused named Murugan, Santhan, Perarivalan and Nalini. The death sentence for three was commuted to life while 19 others were set free. In 2014, the apex court commuted the death sentences of all the four accused over the delay in disposing of their mercy pleas. John Abraham-starrer Madras Cafe was loosely based on the events surrounding Rajiv Gandhi’s assassination.

Beant Singh: Former Punjab chief minister Beant Singh was assassinated in a suicide bombing at the secretariat complex in Chandigarh on August 31, 1995. Credited with ending the Khalistan movement in Punjab, Singh lost his life in the attack masterminded by Babbar Khalsa International. Balwant Singh Rajoana, who was kept as an alternate to carry out the suicide attack if the original had failed, was sentenced to death but was later given life term. The other accused Jagtar Singh Hawara is currently lodged in Delhi’s Tihar jail. 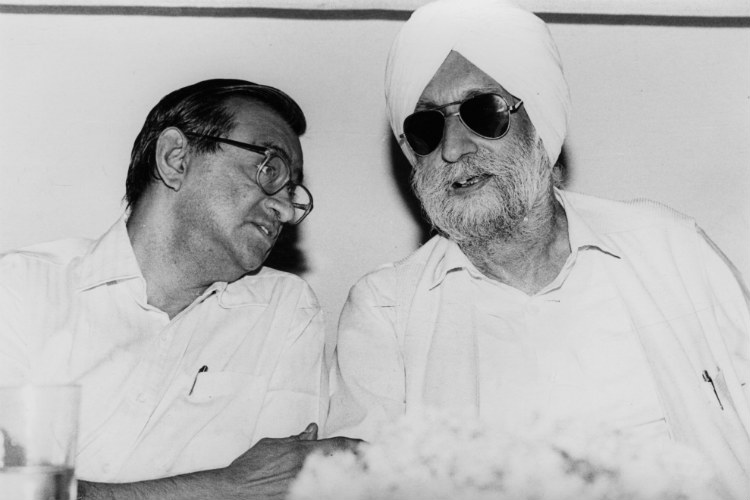 Former Punjab CM Beant Singh (right) was known for his crackdown on militancy in the state. Photo: Express)

Also read: Everything that’s wrong with the glorification of violence in this new viral Punjabi song, Jail

Pramod Mahajan: Hailed as the Bharatiya Janata Party (BJP) poster-boy in his heydays, Pramod Mahajan was shot at his residence on April 22, 2006 by his younger brother Pravin Mahajan. He succumbed to his injuries 13 days later. Pravin Mahajan was sentenced to life imprisonment in 2007 but died of brain haemorrhage three years later.

Vidya Charan Shukla: Notorious for his role as Minister of Information & Broadcasting during the Emergency, Vidya Charan Shukla died of injuries received during a Maoist attack on a convoy of Congress leaders in Darbha town of Chattisgarh on May 25, 2013. His Congress aide Mahendra Karma too died during the ambush.

Phoolan Devi: After giving up arms as a dreaded dacoit, Phoolan Devi successfully contested the 1996 Lok Sabha elections as a Samajwadi Party candidate from Uttar Pradesh’s Mirzapur. She lost her seat in the 1998 polls but got re-elected from the same seat in the elections held next year. On July 25, 2001, Devi was shot dead outside her Delhi home. Shekhar Kapur’s critically acclaimed film The Bandit Queen was based on her life. 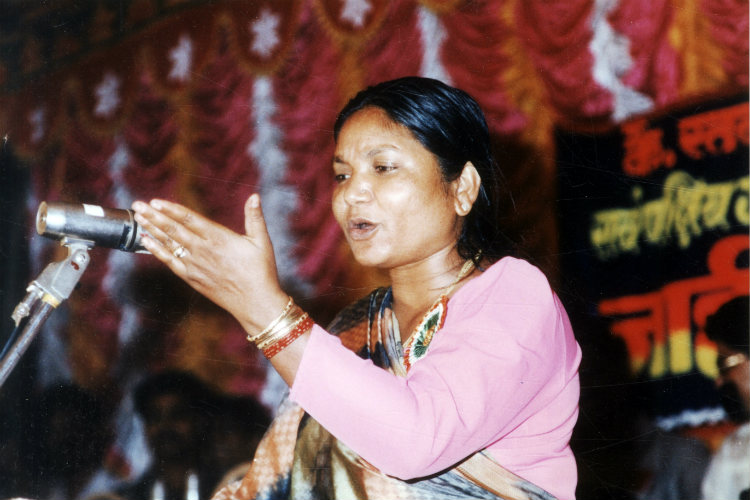 Lalit Maken: On July 31, 1985, Congress MP Lalit Maken was gunned down by unknown assailants outside his residence in a busy industrial area in Delhi. His wife Gitanjali too died in the attack. It was reported that Maken, a Lok Sabha MP from South Delhi, was on the hit list of Punjab-based terrorist groups after the 1984 anti-Sikh riots. Senior Congress leader Ajay Maken is his nephew. 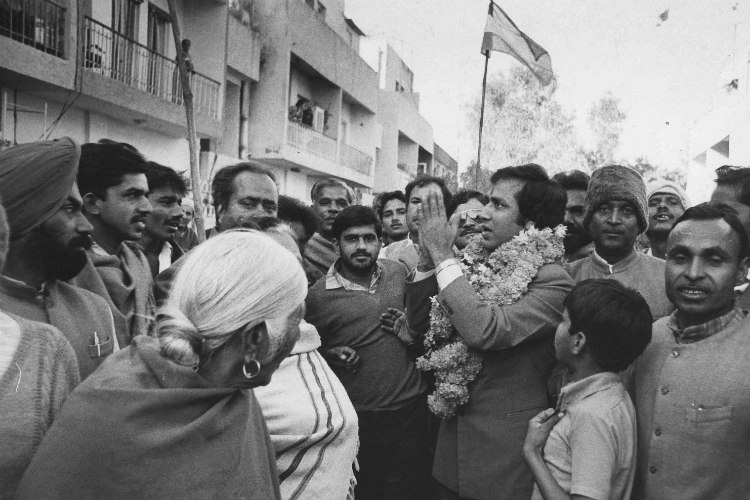 Lalit Maken during his election campaign in 1984. (Photo: Express)

Lalit Narayan Mishra: Lalit Narayan Mishra, who served as a railway minister in Indira Gandhi’s cabinet from 1973 to 1975, was killed in a bomb blast at Samastipur Railway Station in Bihar on June 2, 1975. Besides being a minister, Mishra was also an influential fundraiser for the ruling Congress party. 39 years later, a Delhi court sentenced four convicts to life imprisonment in the case.

TP Chandrasekharan: TP Chandrasekharan was a communist leader who broke away from the CPI(M) to form his own outfit Revolutionary Marxist Party in Kozhikode district of Kerala. On May 4, 2012, he was attacked by unknown assailants and was hacked to death. According to reports, he received 51 injuries. Recently, the Kerala High Court directed the Centre and CBI to respond to a petition filed by his wife KK Rema, who sought a probe by the premier investigative agency into the conspiracy surrounding the CPI(M) rebel’s murder.