It might not be the first beef festival to be held in Kolkata, but the Kolkata Beep Festival is surely getting a lot of attention.

The event, set to be held in June 23, is being organised to “celebrate” a wide variety of beef dishes not commonly available in the city. But ever since he made the announcement, 24-year-old Arjun Kar has been receiving threats online. Some accuse him  of hurting Hindu sentiments while others feel the event is deliberately provocative. In the backdrop of the constant threats, Kar had to change the festival’s name. Kolkata Beef Festival is now Kolkata Beep Festival.

“For us, the event matters the most. We wanted to give a funny response to the criticism surrounding the event. That’s why we decided to change the name,” Kar told InUth, clarifying that the menu won’t change.

The event is being organised by The Accidental Note, the event management firm owned by Kar. The company has collaborated with many chefs who are preparing over 20 dishes. Apart from beef, some pork and fish items will also be served. The festival will be organised at Lytton Hotel. 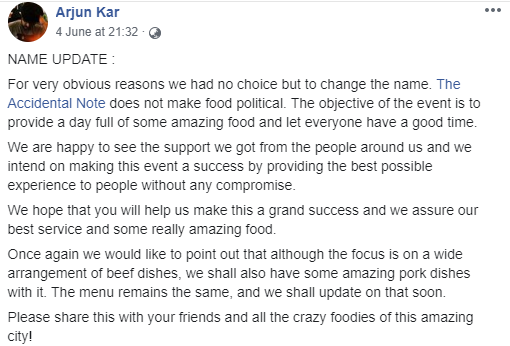 In the recent years, India has witnessed a spate of incidents of cow vigilantism and violence. Many states have banned the sale and consumption of beef to ensure the protection of cows. However, in West Bengal, consumption of beef is not illegal. There are a few restaurants in Kolkata that serve beef.

Doma Wang, a well known Kolkata-based restaurateur who opened the city’s first ‘beef cafe’ in 2018 says she haven’t faced any problem so far. “When I opened my cafe, I received a lot of threats on social media. I didn’t pay heed to any of them. Till now, I have not faced any actual threat. The sale of beef has been as it was before,” she told InUth.

“In Kolkata, this has never been a problem,” she added.

Her sentiments were echoed by Kar who emphasised that the city has always celebrated all kinds of food. “Over 7000 people have showed their interest in the event on our page in less than 5 days. Those who are abusing are not even from Kolkata. Many of them are fake accounts,” he said.

But he is nevertheless cautious and wants to ensure that no untoward incident happens in the festival. Only limited passes are being sold to avoid overcrowding. Moreover, private security guards will be roped in to manage the crowd. Kar is also planning getting in touch with Kolkata Police for assistance. 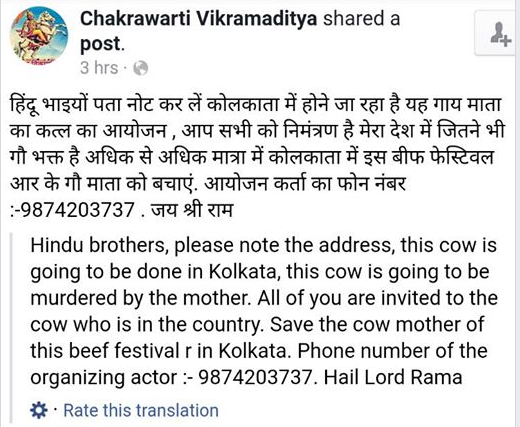 “The event is neither political nor religious. The only idea is to provide good food which is not easily available to the people at an affordable price. I don’t understand why it is such a big deal,” Kar told InUth.

And for those criticising the festival, he just has one thing to say – “If you don’t like it, just ignore it. No one is forcing you to attend the event. I am not forcing my idea on anyone.”