From the epic episodes of Mahabharat to Malgudi days, Doordarshan entered people’s lives much before some of the brainless Indian TV shows hit the television screens. However, with time the popularity of the public broadcaster seemingly faded away paving way for more channels for the audience to choose from. Now, in a bid to connect with the youth, DD is all set to get a major makeover.

The DD channel is now changing its iconic logo that has been the channel’s trademark design which symbolises an eye for the last 58 years. The channel has floated a logo design contest and has also announced a cash prize of Rs 1 lakh for the winner.

“Doordarshan logo over the years has inspired deep nostalgia of an era when the public broadcaster was the only television channel of the country. With the opening up of Television market to private channels, a whole generation of youth need to connect and identify with DD. In order to engage with India’s youth and to get a mindshare for DD brand within the current generation, DD is seeking a new logo design,” DD said in an official statement.

“The new logo while recalling the strong nostalgia associated with the DD brand, should reflect the aspirations of new India. DD invites all Indian Nationals to participate in designing a new logo for the flagship Doordarshan Brand. The Logo shall comprise of an attractive design depicting Doordarshan,” the statement read as. 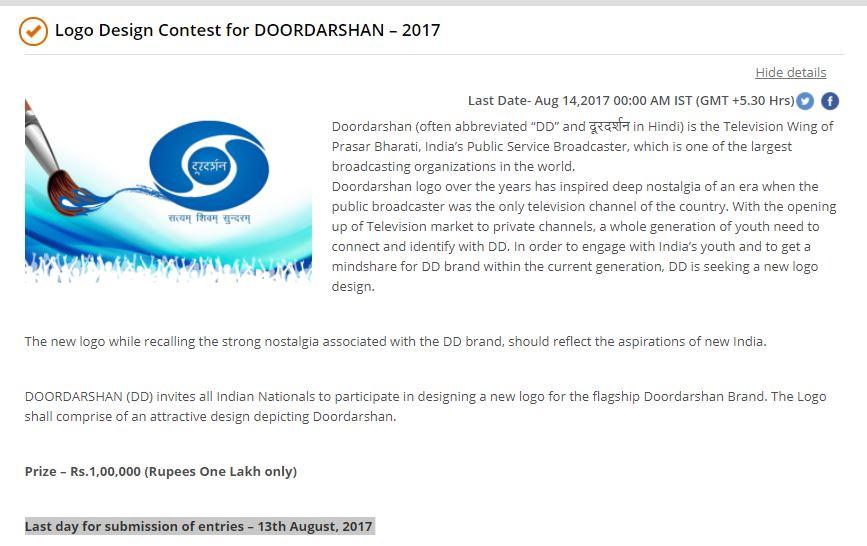 The last day for submission of entries is 13th August 2017 and only one entry shall be permitted per individual or organization. As per the terms and conditions of the contest, the winner cannot exercise any right over it, after accepting the prize.

The entries sent would be carefully scrutinised by a specific selection committee who would also make sure that the sent entries are not plagiarised. For further information on the contest, you can head to the official website.