When it comes to helping people in need, the Sikh community leads by example. The men in turban grabbed global limelight after they opened the door of Gurudwara after London bridge attack in June. Yet again, in a wonderful gesture, they have come to rescue of Tamil Nadu farmers who are sitting in protest at Jantar Mantar, Delhi. The Sikh volunteers of Delhi’s famous Gurudwara, Bangla Sahib have selflessly opened their kitchen to the farmers who have been protesting in the national capital demanding loan waiver and drought-relief package.

“These protesters at Jantar Mantar come from far places. Neither do they know the language nor where to go to eat. So we deliver langar food twice a day to them,” Manjit Singh, President of DSGMC, told NDTV.

Also Read: Sikh student stuns all with his graduation speech at UC Berkeley! Here’s the must watch video

The Bangla Sahib Gurdwara serves langar lunch which has chapatis, dal, sabzi and kheer to around 10,000 visitors everyday at regular intervals.  “We initially took the same food for the farmers but soon realised they prefer rice over chapatis. So now we send some rice too,” he added.

The farmers are demanding a Rs 40,000 crore drought relief package, farm loan waiver and setting up of the Cauvery Management Board as the state witnessed one of the worst droughts in over a century with 60 per cent deficit in annual rainfall. 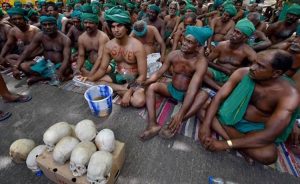 The farmers resumed their protest in July as they felt cheated by the state and central government which had assured them that their jewelleries and assets will not be sold by banks.