Here’s a look at some of the pictures from the photo series: 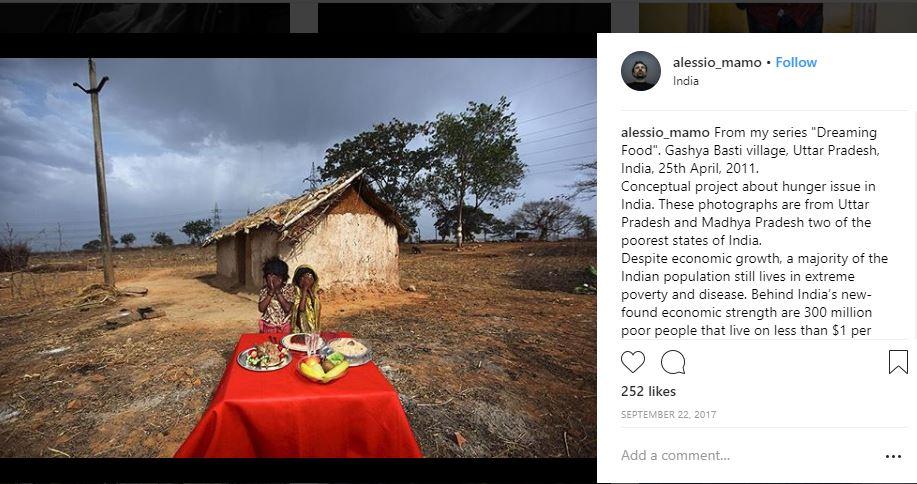 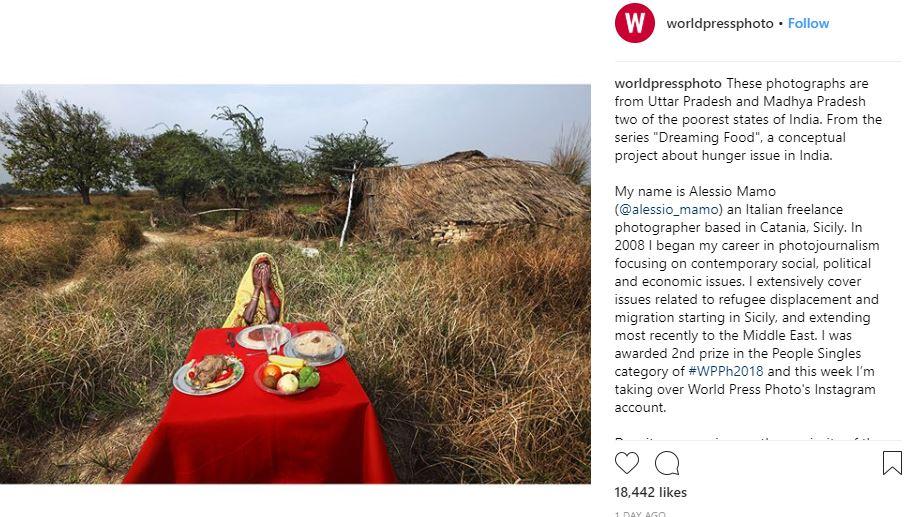 ‘Dream about your favourite food’

In his description, Mamo says how India is battling poverty and hunger while quoting statistics about ‘2.1 million children under 5 years dying of malnutrition annually’. He has also mentioned that his ‘conceptual project’ was inspired by food wastage in the West, especially during Christmas.

The people who were photographed for the series were made to stand in front of a table with fake food and were told to dream about their favourite food. Clearly, the subjects were made to act for the dramatised photo feature.

Wow, this is tasteless and crass. From photographer @alessiomamo: “I brought with me a table and some fake food, and I told people to dream about some food that they would like to find on their table.” https://t.co/kXHa5Tv9rv pic.twitter.com/eeZXUlNMak

While responding to one of the comments, Mamo wrote that his intention was to highlight the issue of food wastage and hunger. “My intention was exactly to represent in a stereotyped way these Indian landscapes (sic) in order to reinforce the concept. This was the idea behind, maybe I did it wrong, or maybe just you don’t like or you think it’s unethical, but the concept was to problematize food waste in front of the hunger in this area of the world,” he wrote.

It was perfectly fair on his part to highlight these issues as a journalist since Indian ranked 100th among 119 developing countries on the Global Hunger Index report 2017. But how can stereotyping (which he openly admitted) serve any purpose?

@WorldPressPhoto before you hand off you IG feed to former award winners – take a look at their work and screen for exploitation and cruelty.

“I brought with me a table and some fake food, and I told people to dream about some food that they would like to find on their table.” pic.twitter.com/eOfUZY82LJ

“It leaves many of us feeling uncomfortable, disconnected and guilty — conflicted between turning a blind eye and reposting these pictures in hopes that sharing images of human suffering will enlighten others about poverty,” she wrote.

Last year, three films starring celebrities Ed Sheeran, Tom Hardy and Eddie Redmayne which were made to raise money for foundations like Save the Children, Oxfam and ActionAid were nominated as the ‘most offensive’ campaigns by Radi-Aid awards. 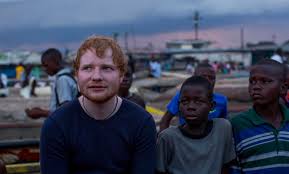 In the video, Sheeran is seen helping two boys from Liberia who were sleeping in a filthy canoe. Afua Hirsch in The Guardian wrote that Sheeran was “guilty of a particularly narcissistic white saviour offence, with an aggravated charge of poverty tourism” in the video, adding such campaigns featuring ‘white saviours’ may bring in cash but they remove all dignity from those who are suffering. Even the well-acclaimed Slumdog Millionaire, a film by British director Danny Boyle has been accused of romanticising Mumbai slums.

This photographer brought his own fake food to put in front of these starving children in India. He asked them to dream about what kind of food they wanted to put on the table. This is an example of #journalism with no moral compass. @WorldPressPhoto why are you supporting this? pic.twitter.com/4hmDzSJO45

Chimamanda Ngozi Adichie, a celebrated Nigerian writer and activist, in a TED talk “The Danger of a Single Story” talked about the underrepresentation of other communities in the media dominated by the West.