Chennai’s acute water crisis has not only disrupted the daily lives of adults, but is also forcing children to skip their classes and help their parents fetch water. Due to erratic water supply, many women and children are staying home waiting for tankers. Some are reportedly going to school on alternate days and walk for a kilometre to fetch water from a dispensing unit.

Priya, a Class VII  student at government girls high school told TNIE, “Since our fathers go to work in the morning, an extra hand is required to fetch water. I go to school on alternate days so as to help my mother carry water.”

Earlier this month, some schools, which used to provide piped drinking water, reportedly asked students to bring their own water. Tamil Nadu’s school education department on June 22 warned private schools against cutting classes short or declaring holidays due to water scarcity. However, school authorities say that keeping schools open amid the water crisis may affect the health of students as water is not available. 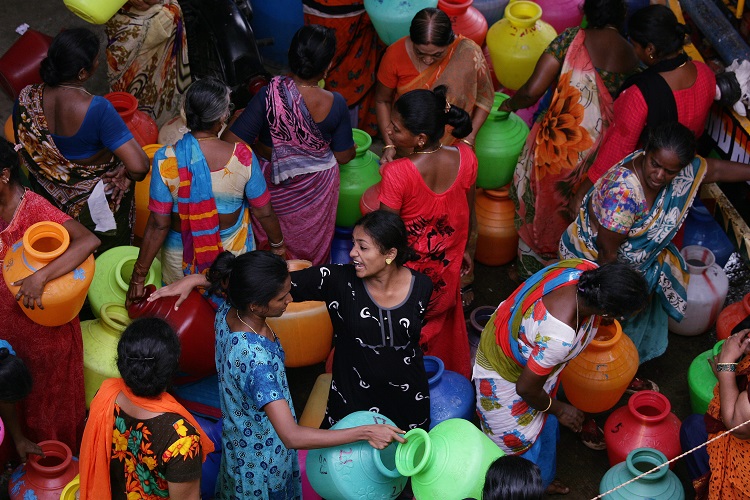 The principal of a city school told TOI, “If the whole city is parched and facing water crisis, how the private schools can make arrangement for water? The department should take steps to make the water available to schools on priority basis (sic).”

On June 26, 500 students participated in a ‘varuna yagna’ at Bal Lok School in Virugambakkam, Chennai ‘to please the rain God Varuna and get his blessings’. This comes after Chief Minister K Palaniswami and Deputy Chief Minister O Panneerselvam asked 50 districts to hold prayers in temples for rains.

The four lakes that supply drinking water to India’s sixth-largest city only contain 1% of the volume they did in 2018, sparking the crisis. According to a study by NITI Aayog, 21 Indian cities will run out of groundwater by next year, including Delhi and Bengaluru, affecting over an estimated 600 million people.