Confused about questions regarding LGBTQ? In a first of its kind initiative, the Indian Institute of Management in Ahmedabad and Kozhikode is starting an online educational series through to educate and sensitise people on the issues concerning gender identity, Section 377 and transgender people. The educational series which will begin on Facebook from June 1 will be called ‘Queer Pe Charcha’.

Not just the two IIMs, several other famous institutes like BITS Pilani, IIT-Bombay, IIT-Kanpur, IIT-Kharagpur, IIT-Gandhinagar and IISc Bangalore have also joined hands for the series.

The idea of a ‘Queer Pe Charcha’ was something that was conceived just over a cup of tea. Himanshu Singh, who was the brain behind this idea says that it is the first time that all the big colleges have come together and are standing united for the equality of the LGBTQ+ community.

Himanshu added that they wanted to reach out to a larger audience hence they thought social media would be the perfect platform to educate people. They have been engaged in classroom sessions on the issue in the past. He also stated that even LGBTQ members are sometimes not aware of their rights. 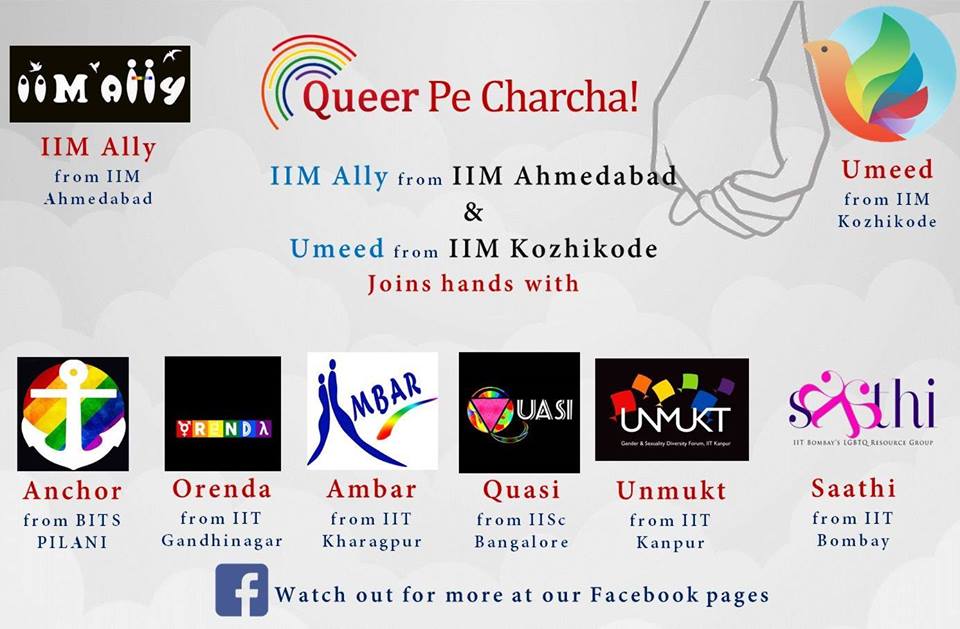 “We know India is a place where sex education is always frowned upon. It becomes harder for the queers to accept themselves when the whole society enforces norms on them. And this can only be solved by education, ” Himanshu told The Indian Express.

Anoop Yadav of IIM-Ahmedabad, who is also to be credited for the idea, says “there are many LGBTQ clubs that are not recognised by college student bodies as one of their own, but IIM Ally of Ahmedabad is the first formally recognised LGBTQ oriented group in any IIM,” said Anoop.