The students will be able to check their results on the official website of the board. The board has also confirmed that they will be following the moderation policy.  “Results will be declared on Sunday. We will follow the moderation policy as enshrined in rule number 59 of examination bylaws of CBSE,” Hindustan Times quoted CBSE chairman RK Chaturvedi as saying.

CBSE board has also released a number of instructions while confirming the result date. Have a look: 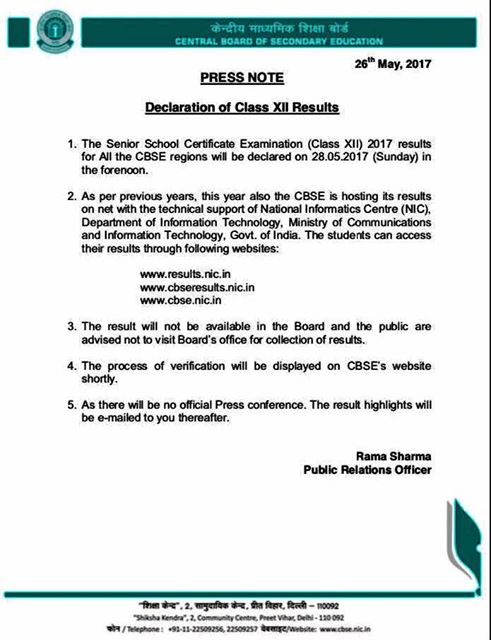 The uncertainty over the declaration of the results came after the Delhi High Court directed the CBSE to not scrap the moderation policy asserting doing away with the moderation policy would be “unfair” to the students who appeared for the exam. However, HRD minister Prakash Javadekar asserted that the students need not worry about the court’s order and that the results will be declared on time.

Also Read: CBSE Class 12 results 2017: 8 tweets that sum up what students waiting for results are going through

At least 11 lakh students had appeared for the class 12th exams that were conducted between March 9 and April 29. Students will be able to check their results on the official website  www.cbse.nic.in or cbse.examresults.net. After filling in the details you will be directed to your results automatically. Students are advised to download and take a print out of the results for future reference.