India’s #MeToo movement continues to throw up new names accused of sexual misconduct and predatory behaviour. The latest addition to the long list of sexual harassment accused is the editor of Times of India supplement Calcutta Times, Satadru Ojha.

The first public accusation against Ojha came from Nasreen Khan, a reporter who worked at the paper from 2013 to 2015.

“…After all his failed attempts to make me fall for his smooth words of fake appreciation in public (causing unwanted jealousy and office politics) followed by arm twisting tactics he had the gall to finally tell me on my face that I can’t work (in Calcutta Times) unless I keep him ‘happy’ and ‘please’ him…”, Khan wrote in a detailed account of the harassment in a news portal.

In her detailed account, Khan narrated how her complaints against the editor’s behaviour were ignored, her stories were manipulated and her computer and mails were hacked. According to Khan, she was fired for an article she never wrote!

“After fighting a lonely battle with the Times of India (Calcutta Times in particular) nothing happened despite all the proofs I submitted to the concerned authorities, marking a copy to the owners as well, including Indu Jain. All I managed to do is force them to set up a sexual harassment committee. After my dismissal I wasn’t surprised to find the committee’s report which stated I could not give them ‘substantial proof so the matter ends there,'” she wrote.

Her account was corroborated by another ex-employee of Calcutta Times office. In a detailed Facebook post Deblina Chakravorty said: “If you’re a woman in Cal Times (sic) team, you gotta give in to Ojhaa’s gaze, which, I’ve heard, some new women members do give in to…Else you would be pushed into a corner to either resign or be a furniture in the office.” 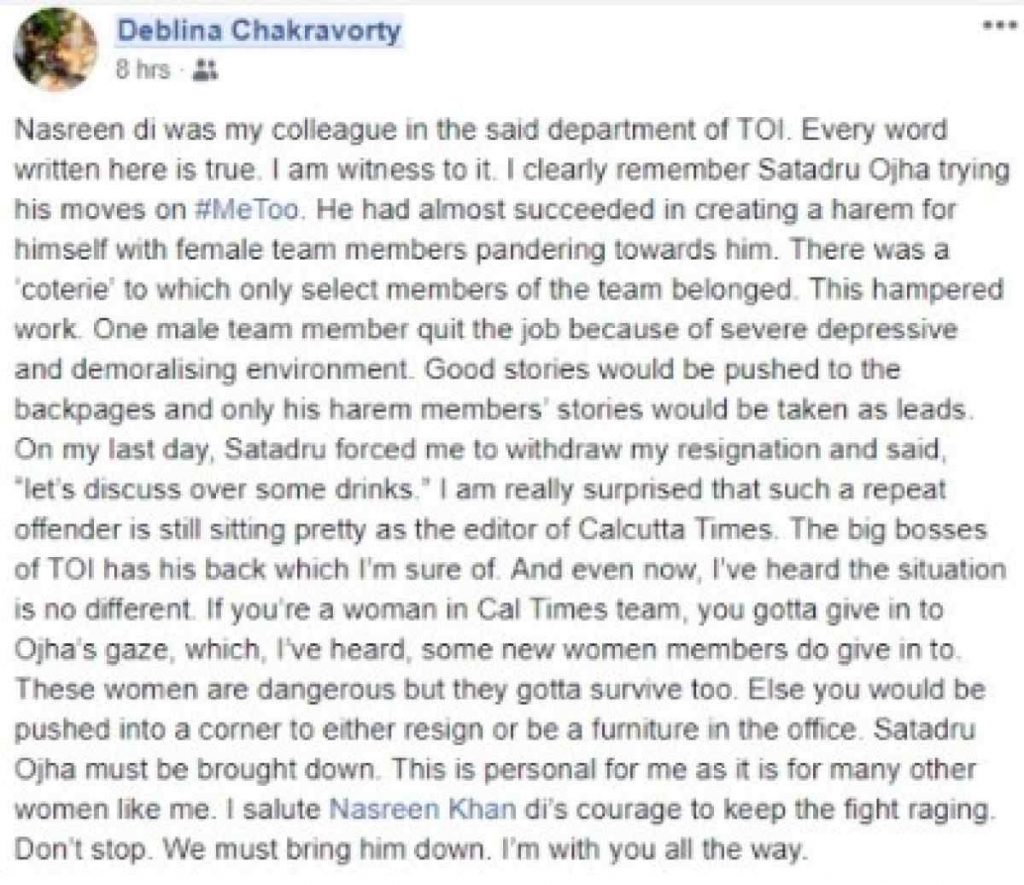 The third account against Ojha came from Amita Ghose, a former reporter at Calcutta Times who now works with Republic TV.

“It began with late night calls which were totally unrelated to work. He would ask me out for drinks and ask questions about my personal life. Eventually, it came to compliments about my dress, the kind of lipstick I was wearing and so on,” Ghose told InUth.com over phone from Kolkata.

According to Ghose, Ojha also had problems with one of her male friends she used to hang out with in the office.

“I think can go on for about 4 lakhs words to explain how I felt, what I actually went through, how horrid it was to face abuse, attempt to physical assault by the other women in the presence of the so-called editor in his cabin itself, how it felt to be treated like a furniture in office for long six months, how hard it was to remain unemployed for 8 months, how terrible it was to face the passionate journalist just turned into a sleeping pill addict every morning in the mirror – but I think I should not,” Ghose wrote in a long FB post detailing her ordeal.

According to Ghose, she had brought the workplace harassment to the notice of all top editors of TOI, however no action was taken against Ojha. Eventually, Ghose decided to quit.

“I don’t want my daughter to suffer or to grow up in this environment. No woman should go through what I have been through under the leadership of this man. This guy hasn’t lost anything despite three women standing against him for his inappropriate behaviour. He’s enjoying his status and power like before. I want this pattern to end,” Ghose told InUth.com

Following the accusations, Ojha took to Twitter and said the allegations against him were not proven after investigation.

Malicious and defamatory statements have been made against me by an ex-colleague, alleging inappropriate sexual conduct. The person is question escalated a complaint to the company, making false allegations. The ICC found the matter to be unsubstantiated….

….The person then filed complaints with the Police and Court. The charges were found to be false after due investigation and dismissed by both authorities.