While opposition parties unite against ramifications of demonetisation on the ground, the ruling Bharatiya Janata Party (BJP) has presented a united public front and supported Prime Minister Narendra Modi’s decision to scrap the old notes. Well, at least in public.
However, several BJP leaders from across the country have bee arrested in the wake of the historic November 9 announcement, some for laundering new currency notes, and others with large amounts in outdated notes. 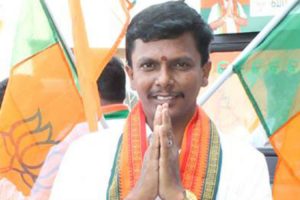 BJP’s youth wing secretary JVR Arun’s Facebook posts showed that he supported the demonetisation move wholeheartedly. However, it turned out that the Salem-based politician who aspires to get elected to the Tamil Nadu state assembly, didn’t practice what he preached.

A  police team waylaid his car last week and found Rs 20 lakh in cash stashed in a bag, according to reports.
It was reported that Arun was in possession of 926 of new 2000-ruppee note, an relatively large value to be had in cash given the current cash crunch facing the nation.
“We intercepted his car and found a bag with a total of 926 pieces of Rs 2000, 1530 of Rs 100 and 1000 of Rs 50,” a police officer was quoted as saying by The Indian Express newspaper.
The police said they were investigating the source of the money.
BJP has reportedly sent Arun a showcause notice.

A candidate in West Bengal state election, with links to ‘coal mafia’ 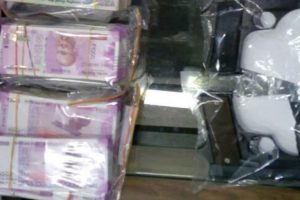 Bundles of new 2000-rupee currency were found in possession of Manish Sharma and his accomplices.

Former Bharatiya Janata Party leader from West Bengal Manish Sharma, along with six of his associates, was nabbed by police in Kolkata on Tuesday for hoarding Rs 33 lakh in new 2000-rupee notes, according to media reports.

Sharma unsuccessfully contested the polls from Raniganj state seat in April-May.
The police said that Sharma had Rs 10 lakh on him at time of the arrest, while the other six persons arrested with him were travelling with a combined cash sum of Rs 23 lakh, it was reported.
The state BJP unit distanced itself from Sharma, who they say they had suspended back in June shortly after the state election.
A news channel reported that one of the persons arrested with Sharma had connections with ‘coal mafia’.
The BJP has been trying to gain a foothold in the eastern state since Prime Minister Narendra Modi came to power,and got a tally of 2 MPs in the last national poll.

A Rajasthan municipality head from BJP

A powerful local politician from the ruling BJP was arrested in Rajasthan on November 9 for accepting a bribe in banned currency notes.

Head of Chhabra Muncipality Pinky Sahu, along with her husband, was arrested just a day after the old currency was scrapped for taking a Rs 1 lakh bribe in old 1000-rupee notes, according to a newspaper report.
The Rs 1 lakh amount was a tranche of a larger sum of Rs 17 lakh, which was being paid to the couple by a landowner to facilitate the division of his land.