Bharatiya Janata Party MLA Phool Singh Meena, who represents Rajasthan’s Udaipur Rural constituency, resumed his studies after a gap of 40 years. The 55-year-old took to study after realising that his speeches to students about the importance of education sounded hollow as he himself was a school dropout.

“I felt they were right. I used to tell people about the importance of education but I myself was not educated. My conscience pricked me and so I decided to resume studies,” Hindustan Times quoted him as saying.

The lawmaker, who had studied till class seven, was also encouraged by his daughter to resume his education.  Thanks to all the inspiration, Meena has cleared class X and XII and now giving his BA first year exams. 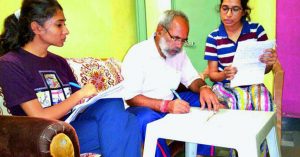 “I had to give up studies after my father, who was in the army, died. I took to farming to take care of my family,” the MLA told Hindustan Times.

Meena can’t attend regular classes due to his busy schedule. He is assisted by Sanjay Lunawat, principal of the government senior secondary school at Manvakheda, who employs various methods to teach Meena.

Lunawat either accompanies the legislator or sends him audios of the lessons  through WhatsApp which the lawmaker listens to while travelling in his constituency or to Jaipur.