The Narendra Modi government had recently made it mandatory to link Aadhaar number with the Permanent Account Number (PAN) for filing Income Tax return now. The IT department has launched a new e-facility on its website to ensure a hassle-free linkage for taxpayers. Aadhaar number  has been made mandatory for applying for PAN with effect from July 1, 2017.  Your PAN card could be rendered invalid if you fail to link it with your aadhaar card number  by December this year.

1) Visit IT department’s e-filing website- https://incometaxindiaefiling.gov.in/-where you will find a new link (“Link Aadhaar”), clicking which would direct the user to the Aadhaar-PAN linking page.

2) Here the individual needs to provide his/her PAN details, Aadhaar no. and and the “exact name as given in the Aadhaar Card”. 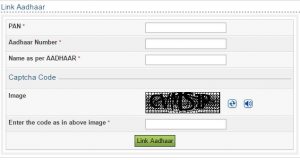 3) Additionally, You also have to fill in the captcha code, so you’re not identified as a bot.

4) After verification from UIDAI, the linking will be confirmed.

5) The advisory available on homepage says that the linking will be confirmed following verification from the Unique Identification Authority of India (UIDAI). “In case of any minor mismatch in Aadhaar name provided, Aadhaar OTP will be required. Please ensure that the date of birth and gender in PAN and Aadhaar are exactly same.” it adds.

The government, under the Finance Act 2017, has made it mandatory for taxpayers to quote Aadhaar or enrolment ID of the Aadhaar application form for filing income tax returns (ITR). Various petitioners against the government’s move have filed for the notification to be withdrawn.

Acting on the appeal, the Supreme Court on Friday agreed to grant an urgent hearing on the plea challenging the government notification which makes Aadhaar mandatory to avail various government schemes. The case will be heard on May 17.