Kiren Rijiju is not a man of his word. Our charismatic junior home minister from Arunachal Pradesh is now defending Gurmehar Kaur’s right to speak her mind. Yes! Barely a day after he trolled the 20-year old Delhi University student for waging an online poster campaign against the Akhil Bharatiya Vidyarthi Parishad (ABVP), Rijiju is now practically defending freedom of speech.

Of course, he is a politician. So, he has the moral authority to backflip. Like a clever political operator would do, Rijiju stirred a controversy by sticking his nose where it was not needed (it was about student politics, after all). He then withdrew after ensuring he had the back of Akhil Bharatiya Vidyarthi Parishad (ABVP) activists.

However, in the past 24 hours while he played his game, Rijiju lost something important. He stopped making sense. Just take a look at some of the statements he has been making since morning,

“Gurmehar Kaur is a young girl, creating controversy over her isn’t right.”

It was you who dragged her into controversy by tweeting out that somebody was “polluting” her mind. Remember this tweet. It is from yesterday,

Why would you even care about what a 20-year old student has to say? There are so many other problems that need your attention like Delhi Police’s high-handedness during Ramjas violence. We don’t see you tweeting out about those things.

“She has the freedom to speak her mind. She has all the right to do whatever she wants. So don’t disturb her.”

Disturb her? But why did you even make a reference to her in your tweet yesterday in the first place?

You are a young dynamic leader of the BJP. The youth leaders from the ABVP look up to you. Had you not made those unfortunate remarks obliquely targeting Gurmehar, the 20-year old would not have been forced to leave Delhi. You didn’t stop at tweeting about her. You even re-tweeted a remark from wrestler Yogeshwar Dutt to reinforce your bullying ways. This was the picture that you re-tweeted along, 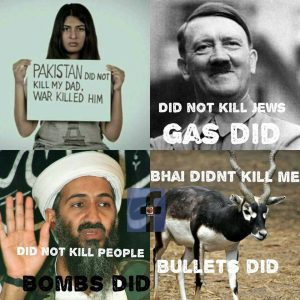 “Everybody has freedom of expression but must act as per the laws of the country.”

We know. Our Constitution guarantees right to freedom of speech to every Indian. Gurmehar Kaur was exercising the same freedom of speech when she waged an online poster campaign against ABVP activists. But you mocked her by referencing her in your tweets, and silenced her ultimately. You could have raised the point about freedom of expression yesterday itself, but you didn’t.

We have never heard you speaking up against certain leaders of your own party who have a reputation of making inflammatory speeches. Your colleagues have time and again tested the limits of freedom of speech, usually during the time of elections. A former minister in the Narendra Modi government, Niranjan Jyoti, made a polarising appeal for votes in 2014. Then we all know, what your prominent Hindu nationalist MPs such as Giriraj Singh and Yogi Adityanath are upto in Uttar Pradesh.

Have you ever criticised them?

Let’s be clear about one thing. The laws of the country are not the values that the ABVP believes in. They are two different set of things. However, you took to Twitter against Gurmehar just because she spoke up against the ABVP, and then your right-wing troll admirers took over. The poor girl was so humiliated and harassed.

“My request to everybody is let her have her own way of life.”

Your whole drama calling on people to respect her way of life is coming across as a sham. First, you attack her because she raised voice against your juniors at the ABVP, knowing completely well that it would serve as cue for other right-wing supporters to turn up the attack.

You let the girl be humiliated publicly for the next 24 hours. And then, you ask the trolls to let her have her own way of life. We know this strategy. You triggered an intense and vicious trolling campaign that was meant to be short in duration, inflicted psychological damage and then you ordered stop. Pretty effective, Sir!

But guess, what? The people know what you and your right-wing troll admirers are up to. We know how you harass political opponents on social media.

“No one should be threatened or harmed. If someone threatens a person on social media, action shall be initiated against him/her.”

You are kidding, right. You won’t put your supporters and admirers in jail. They threatened Gurmehar with rape on Twitter. She even alleged in a TV interview that the social media user who harassed her described what he would do to her in graphic detail. Being a home minister of India, Gurmehar’s statement should have made you shudder and swung you into action.

Gurmehar’s case is more recent. Let’s rewind a bit. What did you do to people who trolled Aamir Khan after he expressed concerns about security of Muslims in our country. Or for that matter, what was your action when Saif Ali Khan was trolled for naming his son as Taimur?

You didn’t do anything, did you?

We understand your game Sir, with all due respect.