Now, this is big news. Fans of Tamil actor Thala Ajith have a reason to rejoice as the teaser of their idol’s upcoming film Vivegam is on a record breaking spree on social media. The film, an action-thriller, directed by Siva and produced by TG Thyagarajan under his banner, Sathya Jyothi Films, marks the third collaboration of Ajith and director Siva. The actor-director duo’s previous releases were blockbusters at the Box Office.

And now, the 57-second-long teaser has emerged as the fastest teaser to clock 4 lakh likes on YouTube. Vivegam teaser took just 26 calendar days (640 hours) to do the same. The teaser has broken the likes of SS Rajamouli’s Baahubali, Rajinikanth blockbuster Kabali and Salman Khan’s upcoming release Tubelight to clock 4 million likes on Youtube. 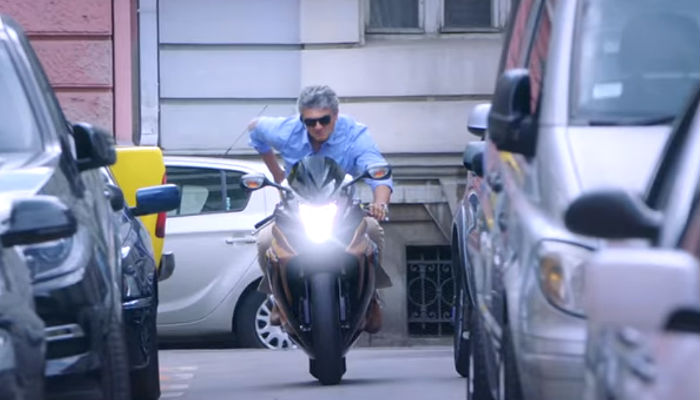 Thala Ajith portrays the role of an Interpol officer in the film. The non-stop high octane action sequences and the different looks of Thala Ajith in the teaser suggest that Vivegam will be a visual treat for the Ajith fans.

Vivegam features Kajal Aggarwal in the female lead. The Magadheera actress will be playing the wife of Ajith in the film. The movie also marks the Tamil debut of Bollywood actor Vivek Oberoi and Kamal Haasan’s daughter Akshara Haasan. The music of the film has been composed by Anirudh Ravichander. Vivegam is scheduled to hit the screens in August.