Akshay Kumar’s Toilet: Ek Prem Katha has taken a slow start at the Box Office in India as the occupancy in the morning shows are in the range of 20 to 25%, which is much lower as compared to Shah Rukh Khan’s Jab Harry Met Sejal and Salman Khan’s Tubelight.

The film has taken a fairly decent start at the interiors like Rajasthan and Gujarat however, the collections are poor at the multiplexes in the urban areas. The film has released on approximately 3000 screens, which is similar to Jab Harry Met Sejal, Jolly LLB 2 and Badrinath Ki Dulhania, however, the occupancy in morning show is behind the other films. 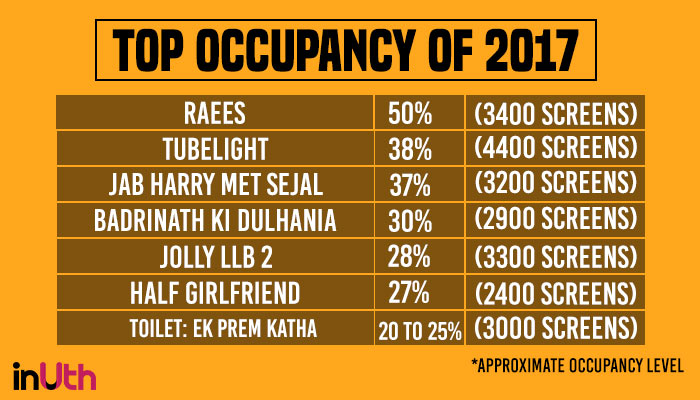 The film needs to show a gradual growth in the collection as the day progresses in order to hit the double digit mark on day one. The morning shows of the film suggest opening day number would be in the range of Rs 11 to 12 crore, however, there might be a possible jump in night shows.

The healthy day one number followed by a jump in collections on Saturday, Sunday and Tuesday (Independence Day) should ensure a good opening week for the film. The fate of Toilet: Ek Prem Katha depends on good word of mouth and the weekend trend of the film would give us an idea about the kind of response film fetched from the audience.

The film needs to earn in excess of Rs 110 crore to be termed as a successful venture for the people associated. Akshay Kumar’s previous release, Jolly LLB 2 raked in Rs 13.20 crore on its opening day. It would be interesting to see if Toilet: Ek Prem Katha manages to challenge this number.