The latest episode of celebrity chat show, Koffee With Karan, saw two leading ladies of Bollywood Kareena Kapoor Khan and Sonam Kapoor sharing the couch. Both are great friends and made a grand entry to the show with Sonam holding preggers Kareena’s hand. And it won’t be wrong to say that both the fashionistas nailed it with their witty sense of humour and were high on energy.

While Sonam was a bit reserved, Kareena was at her best and she clearly outshines her in this episode. Both were unstoppable and Kareena left no chance whatsoever to embarrass BFF Karan Johar. Here are some best moments from the show, where Bebo proved that she is the ultimate queen of sass: 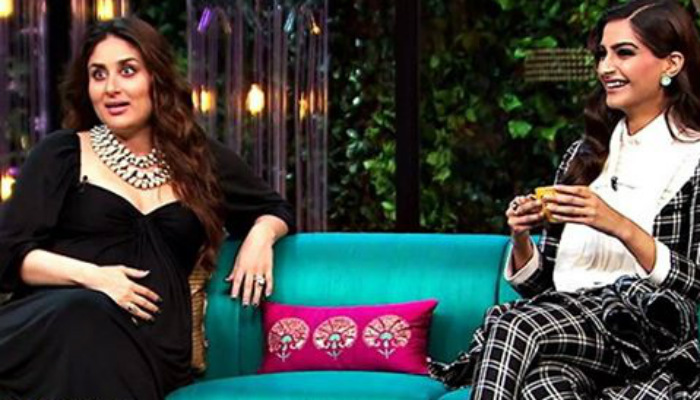 On choosing between Priyanka Chopra and Deepika Padukone

When Karan asked Bebo who is a better actor between Deepika Padukone and Priyanka Chopra, she dodged the question saying: ‘They both are in Hollywood now, sab bus pakad kar jaa rahe hain’.

ALSO READ: Koffee With Karan: These 5 witty statements of Jacqueline Fernandez will make you go red

Kareena looked least interested in answering the question and said: I am happy with whatever RK wants. When, Karan reminded her that how she teased Ranbir with Katrina’s name in the last season, Bebo burst into laughter and said she is more protective towards him now. While Sonam said that she and Ranbir are very good friends and its is Karisma Kapoor who wants them to be together, but that is not going to happen ever.

On her Koffee journey

Karan played a video of Kareena’s journey on the show and after watching it, Kareena said: I deserve an Oscar for this. She was totally cool after watching her in the previous seasons and also made fun of herself when Karan said that was the most consistent celebrity on his show but every time with a different partner.

When Karan asked her what would she do if she was stuck in an elevator with brother Ranbir Kapoor’s ex-flames Deepika Padukone and Katrina Kaif, Bebo very sarcastically said that she would kill herself. And when asked about being stuck with Shahid Kapoor and hubby Saif Ali Khan, she said: I think that will be great. Shahid and Saif share a great rapo and they are also working together in Rangoon. I think, it would be much cool if the makers had signed me as a heroine opposite these two.

Well, that’s not all Karan also called BFF Kareena a social media stalker and revealed that she keeps a tab of everybody’s airport look and stays undercover. With Kareena being at her classy best, this was so far the best episode of Koffee With Karan.

And with desi girl Priyanka Chopra to be the next celeb on the show, let’s see what all is in store for us!