Actor Kamal Haasan on Tuesday unveiled the first look poster of his upcoming film Vishwaroopam 2 and his fans went gaga over it. The film is a sequel his 2013 release Vishwaroopam and was in news ever since its announcement. The film is written and directed by the actor himself and it is produced by Kamal Haasan’s production house Raajkamal Films International.

The actor took to his Twitter handle and shared the poster with a caption: “With love my country and its people.” Haasan appears in a bright blue suit against the backdrop of India Gate in the poster. Sporting bandages on his chin and near the left eye, he stands with the national flag fluttering over him and his right hand placed over his heart as if taking a pledge.

The poster has kindled curiosity among fans on how racy and action packed the movie will be if the first-look appearance of the actor was any indication. While the release date has been speculated for quite some time by the fans, the poster says “targeting release 2017.” Also, the Tamil letters indicating Vishwaroopam has been written in the style of Urdu. 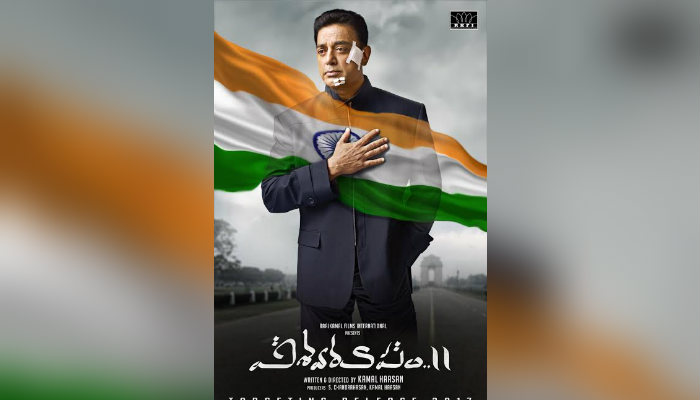 Not only praises but the film also attracted a lot of negative publicity for its terrorism plot and the release of its prequel was also disrupted because of objections from some groups. Kamal Haasan will be seen in the role of a spy in Vishwaroopam 2. The film also stars Pooja Kumar, Andrea Jeremiah, Rahul Bose and Shekhar Kapur in prominent roles.

But one actor who took all the limelight from Kamal Haasan was none other than the veteran actress Waheeda Rehman, who is also playing an important role in the film. , the film will explore the mother-son sentiment between Haasan and Waheeda Rehman, who has played a pivotal role.

Yes, that is true. The actress will portray the character of Haasan’s mother on-screen and the film will also explore the mother-son sentiments. Well, with Waheeda Rehman playing Kamal Haasan’s mother, it will be interesting to see how the audience will react to this cast.