The official poster of Tamil actor Jayam Ravi’s upcoming movie Tik Tik Tik has been released. The film tipped to be India’s first space thriller has been directed by Shakti Soundar Rajan and bankrolled by Hithesh Jhabak. Tik Tik Tik also marks the second collaboration of Jayam Ravi and Shakti Soundar Rajan after the 2016 Zombie thriller hit Miruthan. The film also marks the acting debut of Jayam Ravi’s son Aarav, who will be seen as the actor’s son as well in the film. Tik Tik Tik stars Miss India UAE 2015 winner turned actress Nivetha Pethuraj in the female lead while noted Singaporean actor Aaron Aziz essays the main antagonist in the film.

Jayam Ravi took to his Twitter page to reveal the first look poster of the film. The poster features the Thani Oruvan actor hanging onto a rope in space, and it seems of a space accident.Interestingly, the title of the film has been borrowed from Ulaganayakan Kamal Haasan’s 1981 crime thriller Tik Tik Tik.

Interestingly, the title of the film has been borrowed from Kamal Haasan’s 1981 crime thriller Tik Tik Tik. “It is apt for the theme of the film, as the predominant concept is racing against time. Shakti and I worked together in Miruthan, which was the first zombie film in Tamil, but it was not suitable for children. So, we wanted to do a film for everyone. When he came up with a script that dealt with space expedition, I was game.” 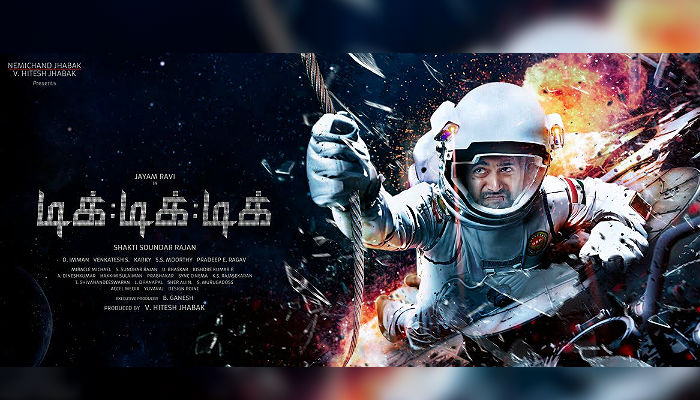 “Tik Tik Tik is the first-ever Indian space film. The character I play is not that of an astronaut, but I am part of a space expedition. The first half deals with how I get involved in the expedition and the second half completely takes place in space. I thoroughly enjoyed working in the film. I’m sure children will be amazed by the scenes involving zero gravity”, Jayam Ravi stated.

Tik Tik Tik is scheduled to hit the screens in August.