Singer and popular TV host Suchitra Karthik gained limelight a few weeks ago when she went on spree targeting stars like Dhanush,  RJ Balaji, singer Chinmayi and star host Dhivyadharshini through her Twitter timeline. And now Suchitra has made it to headlines again after she leaked private pictures of few stars online. Though she deleted the controversial pictures soon, it caught the attention of netizens who made it viral.

The pictures which surfaced on the Internet included a cosy picture of Anirudh and Andrea. The relationship between these two stars has been in news for quite some time now and this is not the first instance of their private pictures going viral on the Internet. Another picture shared by Suchitra featured a selfie of Dhanush and Trisha. Suchitra also tweeted a picture of Hansika partying and VJ Dhivyadharshini giving someone a hug. 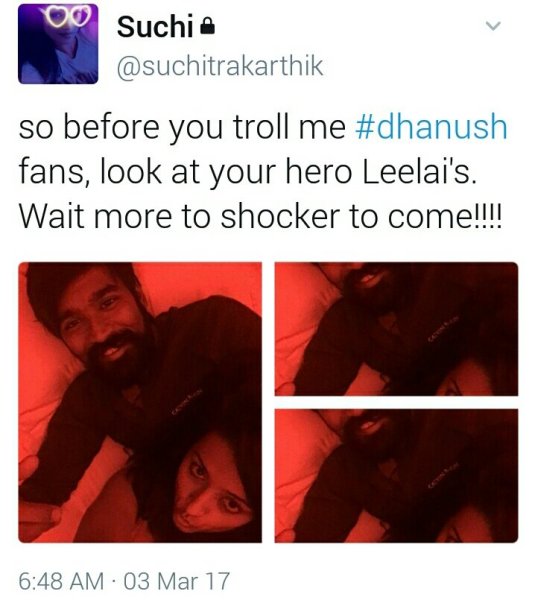 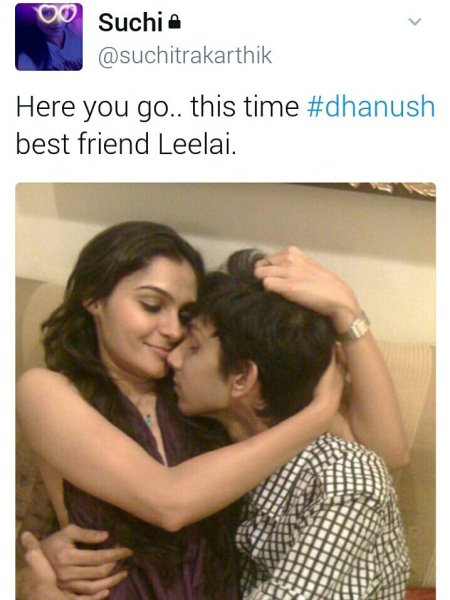 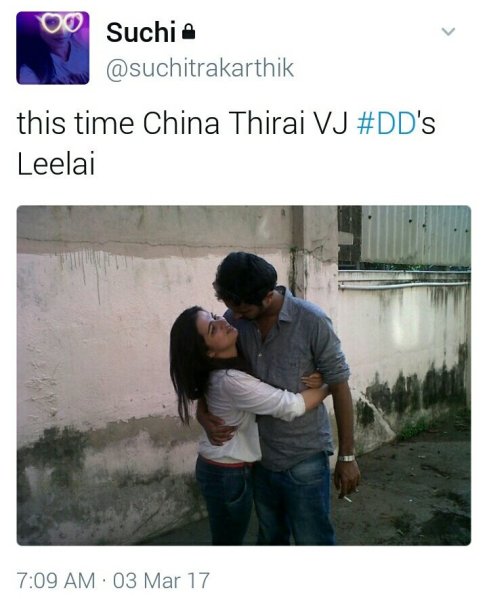 Last week, Suchitra posted many tweets in which she spoke ill about Dhanush and Isha Foundation head Sadguru Jaggi Vasudev. The singer also alleged of being roughed up by the team of Dhanush. Back then she had tweeted, “This is Suchi, I’m back. I’m safe and I’m ready to tell everyone what a lousy game #Dhanush played. no imagination. Paavum. #Simbu you’re it. That’s my arm – from rough handling by #Dhanush’s team. Sorry buddy – disqualified.” She had also posted a picture showing her bruised arm.

After the pictures went viral, Suchitra’s husband took to Facebook to say her wife’s account was hacked. He wrote, “The last few days have been disturbing for us as a family as Suchi’s Twitter account was hacked. Today we have retrieved her account. All the tweets published over the last few days were not by Suchi and is completely false. I personally apologise to all the people concerned as I understand the stress it would have caused them. I request the media to show sensitivity and not sensationalise this. Thank you all for the support.”