Shivaay featuring Ajay Devgan, Erika Kaar, Sayyeesha Saigal, Vir Das and Abigail Eames and  is getting critical appreciation post its release. While fans are looking forward to enjoy the action scenes of Shivaay, it’s clash with Ae Dil Hai Mushkil, this Diwali weekend has set the rivalries among the fans. However, before you book your tickets, we need you to look at what the critics have to say about the movie. When the director released the songs and two trailers of for the movie, fans went gaga over the concept of the film. Shivaay piqued our interests with its intriguing plot. 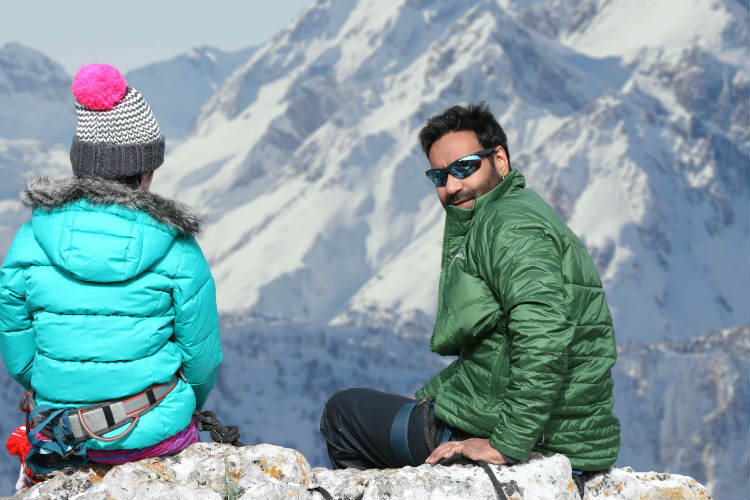 The ‘shlokas‘ in the background and the mesmerising songs will definitely pull the audience to the theaters to watch the film. The fresh pairing of Ajay Devgn and Erika Kaar looks beautiful on the screen. Ajay Devgn has done everything to make Shivaay a big hit. He shot in extreme weather conditions and has vouched how his film will change the scenario of action films in the Bollywood. But were his efforts criticised or liked by the critics who saw Ajay Devgn’s Shivaay not as fans?

Raja Sen, Reddiff said that there is nothing new Ajay Devgn’s Shivaay is bringing to the audience.

“Shivaay’s kidnapped daughter, played by an adorable girl called Abigail Eames, is a mute child, which makes me believe that this film is, on some warped level, Devgn’s version of Salman Khan’s highly effective Bajrangi Bhaijaan. Except in the Devgnverse, Nawazuddin Siddiqui is replaced by Vir Das — a decision that really tells you all you need to know about this film.”

“The Shivaay screenplay is predicated on a weak, arbitrary premise. The hero falls for a Bulgarian girl Olga (Polish actress Erika Kaar). But he is in no mood to accompany her to her homeland. “Shivaay Himalaya ke siva nahin jee sakta,” he tells her rather airily. In fact, with Ajay Devgn not only acting but also directing, Shivaay is Singham (minus the khaki uniform) transported to Sofia and the Balkan mountains.”

Sonup, Indian Express, talks about how Ajay Devgn is the only saving grace of Shivaay

“The Ajay Devgn movie drags on and on, making it a literal snooze fest after a certain point. And that is perhaps Shivaay’s biggest shortcoming.Ajay’s strength lies in his acting. Unfortunately, the same gets lost in the midst of some mindless action which starts playing itself on loop every time the bad guys appear. The stunts lack the finesse you would expect from an action-packed film and making matters worse is that they are badly choreographed, which take away the pleasure of watching Ajay perform some great moves while tackling the villains. Talking about villain, without letting the cat out, we have to say that this was the biggest let down.”

Devarsi, India Today, finds the movie to be a bit illogical:

“The story of Shivaay has more meanders than the river Nile. It starts off in the Himalayas, reaches half the world away in Bulgaria. While the location shifts only a few thousand miles, events in the story are light years away from any sense or logic. Watch Shivaay if you have ABSOLUTELY NOTHING ELSE TO DO. Else watch a documentary on mountaineering. Or child trafficking. Or Bulgaria. Or whatever you want to. (Just a special mention for the company which made the tent that weathered pretty much everything.)”

However, there are several reasons why you should watch the film. We found some cool facts of Shivaay that will definitely drive the audience to the theater.

The movie already has a huge fan following in metropolitan cities.