The film, a wrestling sports drama, Godha is also the Malayalam debut platform of popular Punjabi actress Wamiqa Gabbi, who made waves with the in 2015 with Telugu film Bhale Manchi Roju and with Tamil film Maalai Naerathu Mayakkam in 2016. The talented actress had already ventured i Bollywood with Sixteen. Apart from her work of cinema, Wamiqa is popular for her Instagram dubsmash videos. 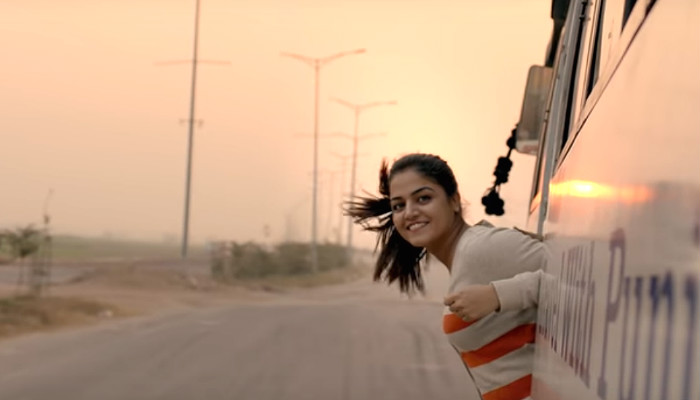 The one-minute and 49 second long trailer begins with Maala Parvathi and Renji Panicker inquiring about Tovino Thomas. Renji Panicker plays a wrestling coach in the film whereas Tovino will be seen as his son who have no interest in wrestling. The trailer also showcases Tovino in a new avatar as the actor will be seen experimenting with comedy for the first time in the film. The Guppy actor will be looking for his hat-trick of success in 2017 as both of his previous releases Ezra and Oru Mexican Aparatha were hits at the Box Office. The trailer also features Aju Varghese and Hareesh Perumanna.

However, the USP of the Godha trailer is undoubtedly Wamiqa Gabbi as the Punjabi girl Adithi. It should be noted that Nazriya’s Om Shanti Oshana is considered as the first Malayalam romantic comedy in which the audience could see a story through a woman’s perspective. And the trailer of Godha suggest that the film is following the lines of the Nazriya starrer. It tells the story of an independent, free-spirited Punjabi girl who accidentally lands up in Kerala and achieves her ambitions. Be it with her wrestling scenes or her charming expressions, Wamiqa excels in every frame of her portions and is sure to leave a mark in the Malayalam industry.

Another plus point of the trailer is the music and BGM score by Shaan Rahman. The song ‘Aaro Nenjil‘ sung by Gowry Lekshmi has already become a chartbuster. The trailer is also released with English subtitles by Vivek Ranjit. Director Basil Joseph’s wrestling commentary at the end of the trailer is fun to hear as well. Going by the trailer, Godha promises to be a sports drama with high on entertainment quotient.

Meanwhile, Godha trailer is trending on YouTube. The film is slated to be released on 12 May 2017.