Malayalam superstar Mohanlal’s Pulimurugan is on a record breaking spree. After completing 100-theatrical shows, Pulimurugan had continued its amazing run at the Kerala Box Office. Directed by Pokkiriraja fame Vysakh and produced by Tomichan Mulakupadam, the action entertainer was released during Dusshera, on 7 October.

And now, Pulimurugan has set an unbelievable record which is very difficult for any upcoming superstar’s films to chase at the Kerala Box Office. The Complete Actor’s film has successfully completed 40000 shows across the cinemas of Kerala. Yes, you heard it right! 40000 shows. With this feat, Pulimurugan has emerged as the first ever film to hit the dream number of shows at the Kerala Box Office.

Also read: 5 reasons why Mohanlal’s Munthirivallikal Thalirkumbol could be his 4th all-time blockbuster in a row

The film, which had completed 100-theatrical days on Saturday is still running in more than 50 screens across the cinemas of Kerala. Even though the three-week long strike between Kerala Film Producers Association and Kerala Exhibitors Association affected the film’s collection quite a lot, but the Mohanlal starrer was rock steady at the limited screens during the period. At the Cochin multiplexes alone, Pulimurugan has crossed the Rs. 4 crore mark, which is first for any films till released now.

Meanwhile, Pulimurugan has surpassed the record of Salman Khan’s blockbuster Bajrangi Bhaijaan to become the third highest running film at the UAE Box Office. The film, which had released across the cinemas of UAE on 3 November 2016 has crossed the 75-theatrical days record set by the Dabangg superstar film upon its release at UAE Box Office. Interestingly, Mohanlal’s 2013 blockbuster Drishyam still holds the number one position with 125-theatrical days followed by the 1996 Hollywood classic Titanic with 100-theatrical days. 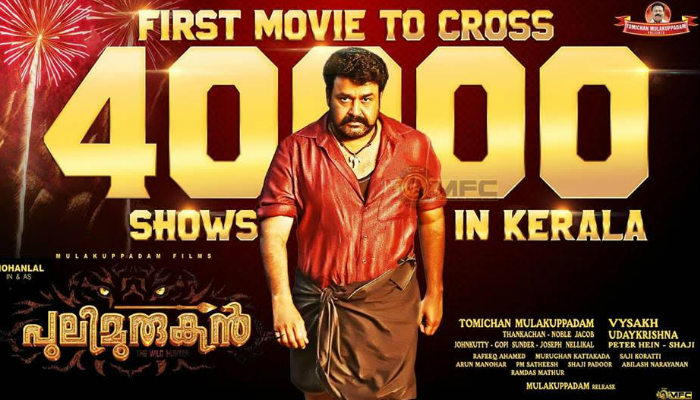