Aamir Khan graced the last episode of Koffee With Karan Season 5. He, along with his Dangal co-stars–Sanya Malhotra and Fatima Sana Sheikh sat on the famous couch and talked about the following things:

1. His experiences of shooting with the two girls
2. Why Dangal is not similar to Sultan
3. Why Dangal is director Nitesh Tiwari’s film and not his
4. How good actors Sana and Fatima are
5. How did the casting for Dangal happen
6. His reactions on watching Dangal trailer online for the first time
And more about Dangal.

Since when Koffee With Karan started being a film promotional show than a chat show? Isn’t the concept of the show to bring out the personal, unseen, unknown side of stars on TV? 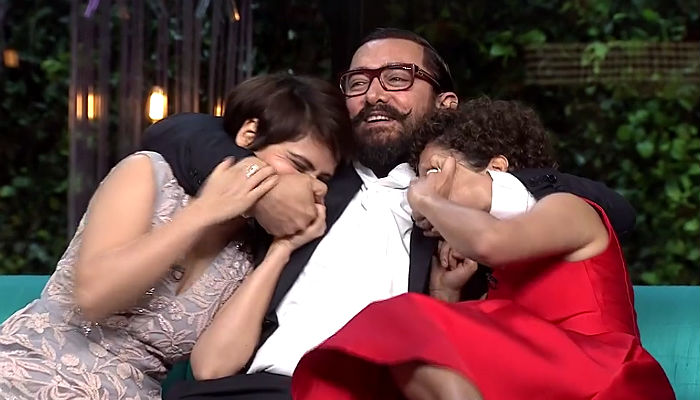 Karan Johar is a smart host. He is a good filmmaker too. He knows how to wrap his questions in a way that doesn’t reflect a direct film promotion. But, the audience is not easy to be fooled too. KWK has its audience. The show entices viewers because it serves as a platform for the fans to get to know more about their favourite stars. And the USP of the Karan’s show is to have people as guests who are not likely to be seen talking together most often in public otherwise. It’s about friends, foes, colleagues who make controversies together and other industry people who provide enough masala when they talk about each other. How did Aamir Khan and his Dangal co-stars fit into the box?

In fact, this season’s opening episode featured Shah Rukh Khan and Alia Bhatt, not because they are friends or share a good bond but because they were bringing their then upcoming — Dear Zindagi at that time. KWK served as a good platform for the promotion of their film.

What is the problem here?

The problem is not inviting guests who had featured together in a film. But inviting people during the time of their film’s release. Had SRK and Alia came way back or much later than the release of Dear Zindagi, it would not have seemed like they are cashing in on KWK’s popularity to promote their film. And the same goes for Aamir and Sanya-Fatima.

Now the news is that even Hrithik Roshan will be arriving on the show soon. Yes, why not? Kaabil is ready to release on 25 January and what a better platform than KWK to promote the film?