At a time when there’s a movie on menstruation – PadMan – waiting for release, and at a time when millions in India are opposing the 12 per cent GST on sanitary pads, one of the biggest actresses of Bollywood, Kajol feigned ignorance on the pretext of her ‘lack of financial expertise’.

Excuse me? Wait, what? But there is more to it.

This was at an event where Kajol was speaking as the ‘Advocacy ambassador of the Swachh Aadat Swachh Bharat initiative’ by Hindustan Uniliver Limited (HUL) furthering central government’s Swacch Bharat campaign, and she announced it on Twitter:

It’s a great honor to be chosen as the Advocacy Ambassador for the Swachh Aadat Swachh Bharat #haathmuhbum initiative @HUL_News. I urge people to become a Swachhta Doot & contribute to a better tomorrow furthering the PM’s dream for a Swachh Bharat @PMOIndia Shri @narendramodi pic.twitter.com/GfLptAY3Os

The actress addressed a press conference after an event organised by HUL on January 10, and that is when one of the journalists asked her about the 12 per cent tax levied on sanitary pads by the central government. The actress rolled her eyes and started answering the question with ‘I don’t think I’ve the financial expertise’. When she was interrupted by the journalist, Kajol shut him up, and continued:

“I don’t think I have the financial expertise to discuss GST. I really don’t. I am an actor, otherwise I’ll be doing some other job. As far as womens’ sanitary napkins are concerned, I think there’s a tax on milk and rice as well, it’s not that they’re tax-free. So, that’s up to the government as they fit.”

Marie Antoinette says hello, btw, Kajol. Clearly, privileges come in different ways to different people but for Kajol, who’s an advocate of Swachh Aadat Swachh Bharat initiative and pledged to be a ‘Swacchta Doot’, this response can only be labelled as ignorant and shameful to be honest. Known for speaking her mind, she could have empathised how women don’t even have access to sanitary pads let alone the ability to pay additional tax on them. For unlike milk and rice, it’s a bodily function, not dietary choices.

Kajol says that she doesn’t have financial expertise to understand GST. Since she’s an actor, so it’s okay not to know about it. How ludicrous! Madam, you are a citizen, you work. You should have some knowledge abou the taxes you’re paying, it’s your right & duty! 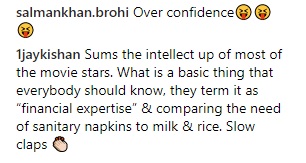 Last year, another privileged actress (whose husband is rooting for Swachh Bharat AND sanitary pads), Twinkle Khanna took a dig at a man defecating in the open’ and was blasted on social media.

Also read: Twinkle Khanna re-shares the same photo of a man defecating on beach to prove her point

Twinkle Khanna was, by the by, one of the first to speak up strongly against the ridiculous 12 per cent GST on sanitary napkins in an interview with the BBC and posted a tweet on her social media:

The absolute least Kajol could have done as an advocate for cleanliness, was to, perhaps, educate herself about the lack of hygienic amenities among those not ‘lucky’ enough to be born to celebrity parents.