Since the news of Farhan Akhtar’s upcoming movie Lucknow Central broke, the entire cine-goers could be seen anxiously awaiting any hint suggesting the look or script on which the movie is based. Here we have a piece of information that may make Farhan Akhtar fans say: Rock On.

The picture of the film set has been leaked and gone viral on social media. The two-acre set is designed to recreate Lucknow jail on a huge landscape. The set up has been designed in the vast Film City studio in Goregaon.

“It took around three months to build the set from scratch,” he added. 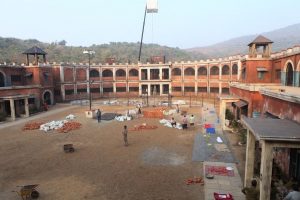