The year was 2000. We know because a mesh-clad Aamir Khan got up on stage and roared  ‘dekho 2000 zamana aa gaya‘. In Dharmesh Darshan’s Mela, we saw the funeral of one of Bollywood’s oldest tropes, the daaku (dacoit) tales. The film that ended the careers of Twinkle Khanna and Faisal Khan (Aamir’s brother), pointed out something crucial. The ravines of Chambal may still reverberate with gun shots, but the narrative has changed.

The genre made a comeback with the likes Tigmanshu Dhulia’s Paan Singh Tomar . A film that made the dacoit tale an intimate character study. Abhishek Chaubey’s upcoming film, Sonchiriya, seems to be in the similar vein . Maybe now is a good time to understand gradual evolution of the Bollywood daaku.

The daaku became a stock anti-hero for Hindi cinema after the success of Mehboob Khan’s Mother India in 1957. Telling the story of a newly-independent India that was still largely an agrarian economy and dependent on its farmers, the film showcased the social evils of the Zamindari system that exploited the already-oppressed class of society. Continuously ill-treated by the local Lala (money-lender of the area) results in Sunil Dutt’s character Birju becoming a dacoit to avenge the life-long indignity doled out to his mother. Mother India was a remake of Mehboob Khan’s own film, Aurat, which came out in 1940.

Mother India’s success meant that Hindi cinema soon began to cash in on the ‘sympathetic’ bandit. These bandits had a particular look about themselves, dressed in black turbans with a black teeka between their eyebrows, they wore a belt made of spare bullets with guns hanging around their shoulders. Also, they rode pristine white horses. We saw more of this trope in Nitin Bose’s Ganga Jamuna – where Dilip Kumar played the role of the good-natured-but-morally-ambivalent elder brother turning to a life of crime. Being wrongly accused of theft and jailed for a year, Dilip Kumar’s Ganga is driven to edge where he chooses to loot his oppressor as a part of his ‘haq ki ladaayi‘. Raj Kapoor’s Jis Desh Mein Ganga Behti Hai also showcases a group of bandits (headed by Pran), who operate on the Robin Hood principle by only looting the rich. 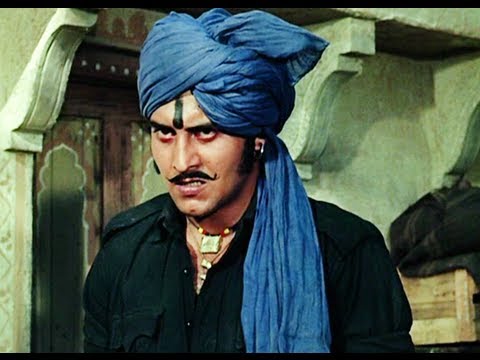 Having long abolished Zamindari by now and on the cusp of a liberalised economy, Rahul Rawail’s Dacait (1987) was probably one of the last films to be made in this template. Starring Sunny Deol, the film follows the journey of a young man turning to the life of a dacoit, after being continuously subjugated by the area’s zamindars. In spite of making martyrs of these anti-heroes, the filmmakers were always conscious about humanising them. There was always the widowed mother and the studious/unmarried sibling, for whom the protagonist would turn to dacoity.

Around a decade after Hollywood produced The Magnificent Seven, Hindi cinema produced its first unofficial remake in the form of Raj Khosla’s Mera Gaon Mera Desh. Significantly reducing characters from the American original, the 1971 film boiled down the confrontation between Dharmendra and Vinod Khanna. A petty criminal in the city, Dharmendra is offered the chance to reform his ways by saving a village from the local daaku, Jabbar Singh’s (Vinod Khanna) torment. Playing the role of the merciless antagonist, Khanna doesn’t hesitate from gunning down elderly men, widows or even children, purely to reinstate his fear in the village folk. 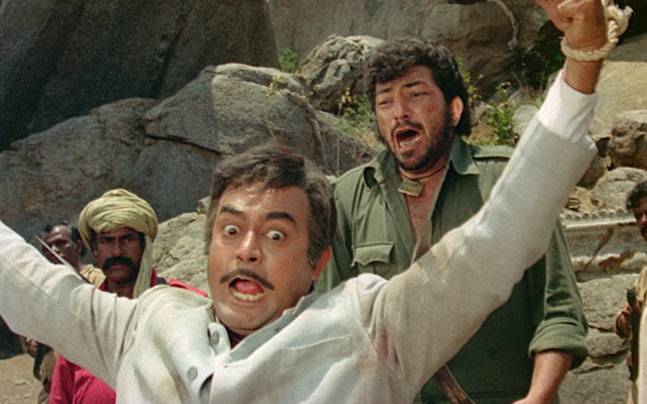 A few years later, Ramesh Sippy stitched together Hindi cinema’s most famous dacoit – Gabbar (rhyming with Jabbar?) Singh. Another remake of The Magnificent Seven, Sippy’s Sholay (1975) proved to be a game-changer. Tropes like a dacoit’s affliction for dancing women as meat steadily cooks on the side, became a staple in such movies after the tremendous success of Mehbooba Mehbooba. Gabbar Singh (played deliriously by Amjad Khan) became a two-word synonym for everything dark, evil that was probably matched in only another remake of this iconic Hollywood Western.

Rajkumar Santoshi’s China Gate (1998) turned the tables on the ‘angry, young man’ taking on the local bandit, by bringing together an ensemble of now-retired army personnel including the likes of Danny Denzongpa, Naseeruddin Shah and the late Om Puri & Amrish Puri. Here in Santoshi’s film, the savage dacoit called Jageera (played by Mukesh Tiwari) delivers one of the most memorable lines from a 90s Hindi film – Mere mann ko bhaaya, main kutta kaat ke khaaya.

Hindi cinema even briefly flirted with the idea of women turning dacoits, after being denied justice by civil society. Releasing in 1987, Bollywood saw both Zeenat Aman and Hema Malini donning a bandit’s black attire in Daku Hasina and Sitapur Ki Geeta, respectively. This was also around the time that the legend of Phoolan Devi had begun to descend on the aesthetic film sets of Bombay. 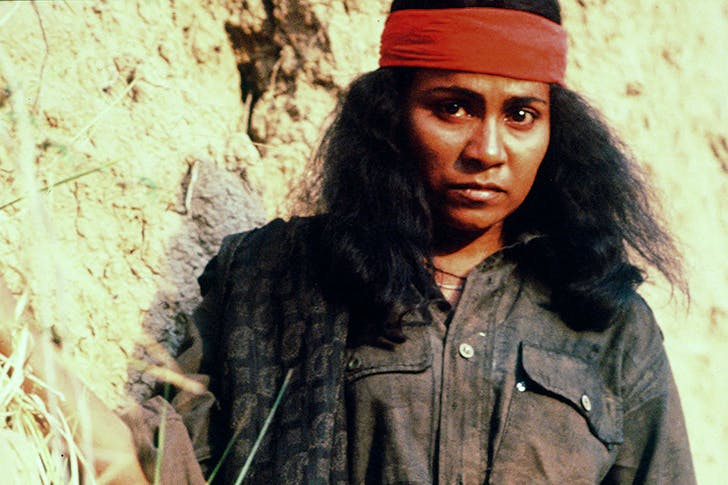 Shekhar Kapur’s Bandit Queen (1994) blurred the lines between a documentary and fiction, as it brought an authentic and unflinching realism to Phoolan Devi’s life story. Starring Seema Biswas, Nirmal Pandey and Manoj Bajpayee in the lead roles, Kapur’s film carefully examined the caste and gender bias in the Chambal valley that turned a petite 16-year-old Phoolan into Phoolan Devi with her famous red bandana. One gets a feeling that the genre of the dacoit film peaked at this exact moment.

After Dharmesh Darshan’s Mela pretty much served as the obituary for Hindi Cinema’s dacoit film, Tigmanshu Dhulia’s Paan Singh Tomar (2012) revived the genre in the garb of a biopic. A fascinating tale of an ex-army-man-turned-national-athlete-turned-dacoit, Irrfan Khan epitomised the honour code of a baaghi (revolutionary). Dressed in a policeman-like khakee, these (mostly) colourful men lived and breathed by a strict code-of-conduct.

Director Abhishek Chaubey’s Sochiriya, which is set during the 1975 Emergency, attempts to decode a dacoit’s belief in being one of the ‘chosen few’ for a ‘higher purpose’. Starring Sushant Singh Rajput, Ranvir Shorey, Bhumi Pednekar, Manoj Bajpayee (once again called Mansingh after Bandit Queen) and Ashutosh Rana, the film looks like a throwback to the colourful eccentricities of the Chambal ravines that Bollywood seemed to have long forgotten about.