While most of the people are still in shock, some are celebrating the victory of Republican nominee Donald Trump. People all over the world, including India, are thinking that America has failed on choosing their next president. However, some are happy and maybe even more than Trump. And one of those is Ram Gopal Varma. Indeed, he is a fan.

So, post the announcement of Trump’s victory, Ram Gopal Varma took to Twitter to share his happiness. We must say he loves attention. He started with congratulating himself for predicting a Trump victory more than 4 months ago. 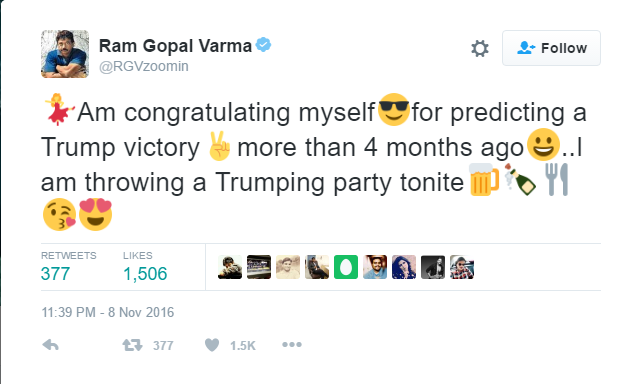 His next tweet was about people who thought Trump was nonsensical 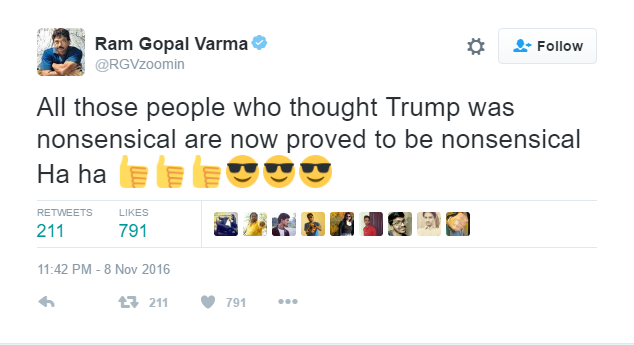 Followed by this tweet where he is comparing with Trump with Obama: 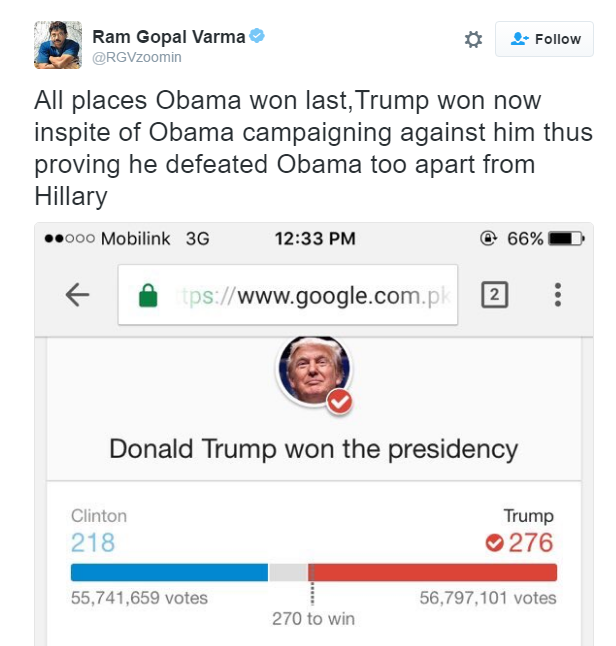 But what went wrong was his sexist and racist tweets and comparison of both present and future First Ladies of the US.

And then the director tweeted a picture of Michelle Obama and Melania Trump with a message, which says: “For some reason, I like the present First Lady much more than the previous..can anyone tell me why?”

For some reason I like the present First Lady much more than the previous..can anyone tell me why? pic.twitter.com/itxmlyryO5

Obama’s and Michelle Obama’s faces must have turned blacker than this with today’s trumping result pic.twitter.com/VMta5QvkZM

US got its hottest 1st Lady since all wives of presidents starting from George Washington ..1002 kisses to Trump for making America Greater pic.twitter.com/fAgff9Dc1X

What happened next is not beyond your imagination. Twitterati fumed over his tweet and slammed Trump over his tweet. While they were all fumed, former Jammu and Kashmir Chief Minister Omar Abdullah gave it back to him in the most classy way. Here’s what he said:

Because Mrs Obama has more class in the little toe of her left foot than you will ever have!!!! https://t.co/wTDWMb5VW6

However, this doesn’t matter to Varma and he kept on tweeting some other disrespectful messages.

I predicted Trump’s win and now my prediction is he will be greatest president ever .Lincoln,Roosevelt,Kennedy etc will be forgotten

Time again it’s proved that Out of the box attitude always works with people ..examples are NTR,KCR Modi and Donald Trump

If Hillary won none would bother to follow what she would do as we know there won’t be surprises..but with Trump everyone will be following

Yes I am black but I luv whites ..All blacks luv whites more,but since I am not egotistic like most of them I accept the truth https://t.co/vrX3FRt69r

More than Indian,I am a Godian n becos God is bigger than jst a country,whatever God creates anywhere in world I luv to chose from his best

I am 5’8,but I luv only above 6 foot guys the same way I like people who are whiter than me

U people who despised him pls grow up now ..He’s the only president who Americans and the world will remember ..All else will seem boring https://t.co/qREqw5zPD5

@RGVzoomin For some reason I find this lizard crawling on my wall better looking than you. I wonder why

.@RGVzoomin also Michelle is still @FLOTUS until inaug so you know. Whatevs.

@RGVzoomin You are not used to meeting educated and classy women, who have a mind of their own?

@RGVzoomin that’s not Melania, so you’re not only racist and sexist but also a liar. You and Donald are made for each other!