Salman Khan and Shah Rukh Khan are one of the two biggest superstars in Bollywood today. But about their popularity on social media platform Facebook? Where do they stand when it comes to followers? Is Salman the bigger star on Facebook or is it Shah Rukh?

We have done the maths for you. But be a little patient. First, let us tell you about their box office performance. Salman Khan’s Tubelight has barely crossed the Rs 100 crore mark. Meanwhile, Shah Rukh’s last release was Rahul Dholakia directorial Raees, that turned out to be an average grosser.

According to Facebook data analysis website SocialBakers, it is Salman who is ahead of his compatriot. The data is compiled from May 29 to July 3. Currently, the Dabangg actor has a whopping 3.51 crore followers as compared to King Khan’s tally of 2.34 crore.

Despite the fact that Salman’s latest release Tubelight tanked at the Box Office, there is no downfall in his popularity. In fact, he has a whopping 1.96 crore fans in India alone. Shah Rukh has 1.05 crore out of 2.34 crore followers. However, the Raees actor witnessed a 1.12 per cent audience growth which is more than Salman’s 0.74 per cent.

If you thought Shah Rukh and Salman are popular only in India, think again. Both the actors are equally popular on Facebook among followers in neighbouring countries. In Pakistan, Salman has 33.57 lakh followers as compared to his Karan Arjun co-actor’s 20.51 lakh fans. 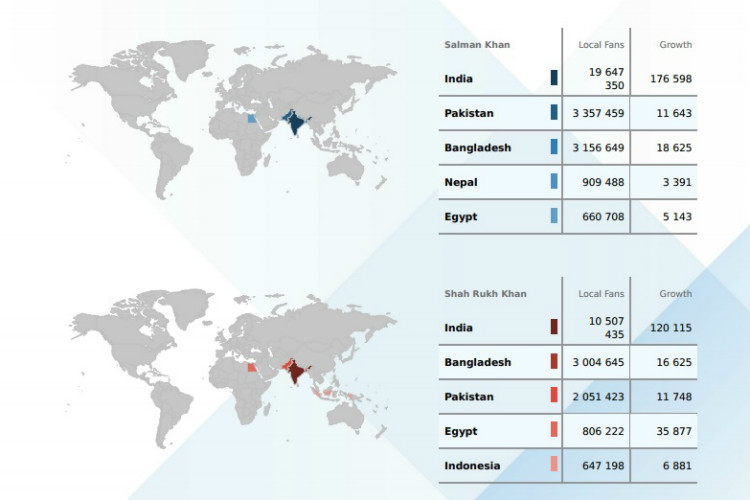 Salman’s huge popularity on Facebook in Pakistan can be gauged by the fact that his 2016 wrestling drama Sultan is the highest grossing Indian film there. It earned Rs 37 crore while Bajrangi Bhaijaan raked in Rs 23 crore and is third on the list. Shah Rukh’s Dilwale had earned Rs 20 crore in Pakistan.

In this age of social media, amassing followers isn’t enough. You need to keep them engaged so that they are retained in the longer run. The Kick actor holds an edge in terms of audience interaction over his erstwhile rival SRK. Just have a look at the numbers. 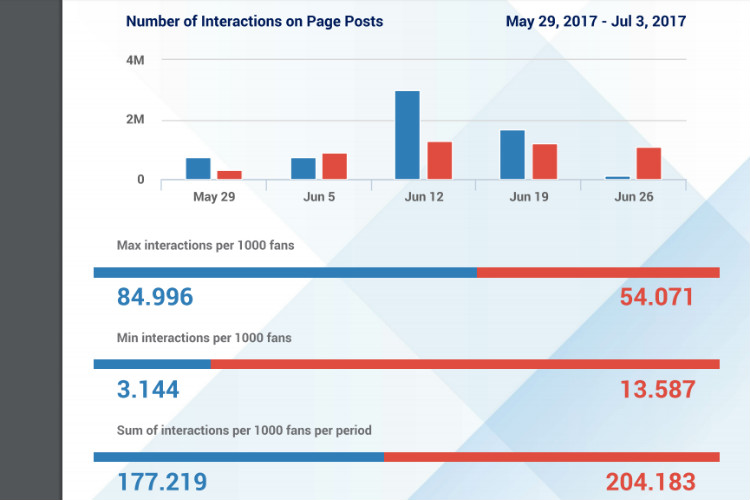 Ever since Shah Rukh Khan played the NRI lad Raj in Aditya Chopra’s Dilwale Dulhania Le Jaayenge, he became a darling of the Indian diaspora. Whether his films did well in India or not, they often emerged as blockbusters overseas. But the tables have turned as Salman has overtaken him in terms of Box Office collections. Even on Facebook, Salman is a hot favourite among users in the US and UK. The 51-year-old actor has 3.84 lakh American users and 1.98 lakh fans adore him in the United Kingdom.

On the contrary, Shah Rukh Khan has 3.32 lakh fans in the US while 1.50 lakh fans from the UK adore him on Facebook. Guess, he needs to pull up his socks so that he does not lag behind Salman.

Also read: Tubelight is a Shah Rukh Khan film not Salman Khan’s, according to a theatre in Brussels