Sonakshi Sinha and Diljit Dosanjh starrer Welcome to New York‘s composer, Shamir Tandon has hit out at those asking the makers to remove the ‘Ishtehaar’ song. In wake of rising tensions between India and Pakistan, Union Council of Minister, Babul Supriyo ‘suggested’ that the song in Rahat Fateh Ali Khan’s voice must be removed from the movie and dubbed again. 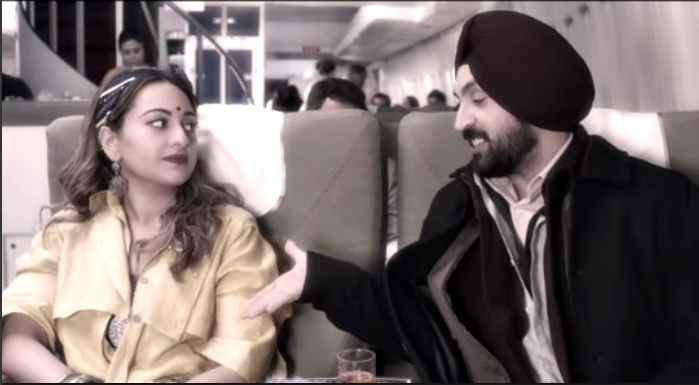 A still from the song

As per the Indian Express, Shamir Tandon lashed out at the unequal treatment and said:

“My point is, how come the same Pakistani singer Rahat Fateh Ali Khan’s ‘Jag Ghumiya’ which was used in the film ‘Sultan’, ‘Mere Rashke Qamar’ which was used in ‘Baadshaho’, skips this sentiment. Or for that matter, Atif Aslam’s recently released ‘Dil Diyan Gallan’ in ‘Tiger Zinda Hai’ or the Ajay Devgn song ‘Sanu ek pal chain’ in the film ‘Raid’ released a couple days ago. Why were these songs not pulled up for using Pakistani voices, while mine has? Because most of those are cover versions and mine is an original?”

The music director, who has earlier co-composed music for movies like Ragini MMS and Page 3, also made it clear that he wouldn’t bow down to any pressure, even if the entire country or the industry sides on not respecting across-the-border talent, he would not abide by it. He said:

“If as a country, or even as an industry, we take a collective stance against working with artistes (who are all blessed by Goddess Saraswati, irrespective of the origin) from across the border, I’m happy to adhere to the same. I will be the first one to refrain.”

Taking a complete opposite stance in the entire situation, the lyricist Manoj Muntashir compared an artist with ‘border pe humare jawaan’, and said:

“Singers from the other side of the border should or should not sing for us, is completely a legal and constitutional call. Whatever law of the land decides, is my decision. But yes, before being a writer, I am an Indian and this status will remain unchanged for the rest of my life.”

Declaring that no final decision has been taken regarding the removal of the song, the perplexed director, Chakri Toleti said, “I don’t understand why we are being targeted like this… We have made an entertaining film and we don’t want to hurt anyone.”

Welcome To New York is set for release in February 23 and stars singer-actor Diljit Dosanjh and Sonakshi Sinha.