The title track of Shraddha Kapoor and Aditya Roy Kapur starrer OK Jaanu is out. And gives you major Oh Humdum Suniyo Re feels. The song has the couple frolicking across Mumbai on a bike. Remember how Vivek Oberoi was shown taking a bike ride across Mumbai in Saathiya? Add Shraddha Kapoor in the frame and you get OK Jaanu title track. Not that we are complaining. The new song from the film is a nice pumped up number.

With visuals showing the beauty of the city, the track focuses on the freedom the couple is enjoying in love. The film deals with the concept of being carefree in love, be in a relationship sans commitment. And OK Jaanu‘s title number justifies that. Sung and composed by AR Rahman, the lyrics of the song are penned down by Gulzar. Another important thing to notice about the song is the fact that once again Rahman introduces a fresh voice. Srinidhi Venkatesh has given vocals for the titled track along with Rahman.

Also read: Ok Jaanu: The Humma Song is what ‘insane love’ is made of 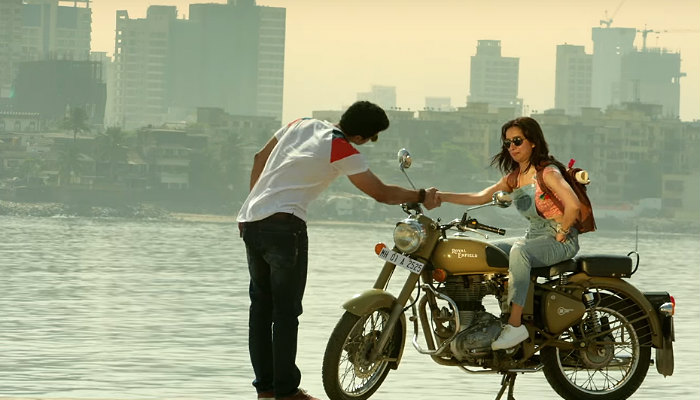 Peppy classical beats, dramatic music, and energetic rhythm, OK Jaanu title track seems full fun. Adding to the fervour is Shraddha’s kiddo attitude and Aditya’s cool look. There are no many serious dance moves in the song but the chemistry between the two stand out again. However, the track just doesn’t surpass the sassy magic Shraddha-Aditya’s chemistry created in The Humma Humma song.

OK Jaanu, directed by Shaad Ali, is produced by Karan Johar’s Dharma Productions and Mani Ratnam. The film is slated to hit the screens on 13 January 2017.

Meanwhile, listen to the title track of OK Kanmani, the Tamil version of OK Jaanu and tells us what you think.