Over a career spanning more than 30 years, Sunny Deol has given us several iconic scenes and dialogues (read dialogues from movies like Ghayal and Ghatak) to relish. Out of the plethora of movies he has worked in, Gadar: Ek Prem Katha definitely qualifies as the most loved Sunny Deol movie ever. Directed by Anil Sharma, the movie’s basis was a cross-border love story between Tara (Sunny Deol) and Sakina (Ameesha Patel).

One of the scenes in Gadar saw Sunny Deol pull a hand pump from the ground and use it as a weapon to fight his enemies. This scene gave a field day to the Internet fellas, thus giving us some lovely jokes on it. Now after 16 years of release of this film, Sunny Deol (while promoting his next, Poster Boyz) spoken about the iconic scene. He said the scene was not supposed to be funny. 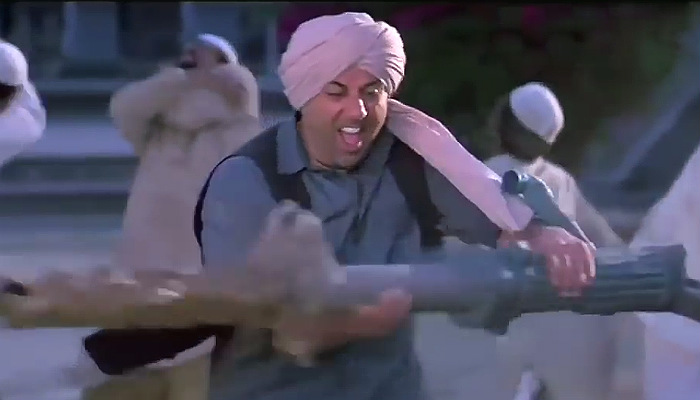 In a recent interview, Sunny said:

This scene was not supposed to be a funny one, although people laugh it out now, after watching or even thinking about the scene.

Also read: 23 years after Darr, Sunny Deol reveals the story behind his fall out with YRF and Shah Rukh Khan

So many jokes were made on this scene, that in Yamla Pagla Deewana there was a scene dedicated to this joke. Check out the 3:00-minute block in this trailer to understand what we mean:

For those who are clueless about this scene, here is what happens in the film. Tara and Sakina decide to go against Ashraf Ali’s (Amrish Puri) wishes to go back to India. During the entire tussle, Tara becomes a one man army ready to take down half of Pakistan. Ashraf Ali asks Tara to say Hindustan Murdabad which irks the latter. As an angry mob advances towards Tara, he uproots a hand pump to face them. This scene established that Tara would never choose his family over his country, and both had equal value in his life.

Talking about the reaction of Tara Singh, Sunny Deol said:

This was an impulsive decision taken by a furious father and husband for his family. When the scene was narrated by the director to me, I didn’t question it even once, because even in real life, a father-husband in that situation would take such a step to save his children and wife from a difficult situation.

And just to take you down the memory lane, check out the scene:

Also read: Sunny Deol calling up Ajay Devgn to talk about Singham 3 will restore your faith in Bollywood friendships

Sunny Deol will be seen next in Poster Boyz, along side Bobby Deol and Shreyas Talpade.