After denying and not agreeing to give him credit for his creativity, Shah Rukh Khan has finally agreed to give Ranbir Kapoor his due. The superstar gave Rs 5000 to Ranbir Kapoor for suggesting the title Jab Harry Met Sejal, the upcoming movie directed by Imtiaz Ali and featuring Anushka Sharma. Earlier, Shah Rukh Khan had said in a tweet that Ranbir Kapoor wasn’t the one who suggested the name, though the latter said he was the reason behind it.

Taking to micro-blogging website Twitter, Shah Rukh Khan shared a picture of him and Ranbir. The Kapoor scion was obviously happy to get his prize but SRK said Karan Johar also deserved a share of the prize. He said Karan Johar gave the word Jab to the title, so he also should be given his rightful share. Diving into the conversation, Karan Johar tweeted that Ranbir deserves him Rs 1250.

In case you don’t know, the name of the Shah Rukh Khan starrer was shrouded in mystery for really long. The makers had said they would give Rs 5000 whose suggested name would become the title of the movie. So, when the title of the movie was announced one day, Ranbir Kapoor was quick to claim his reward. 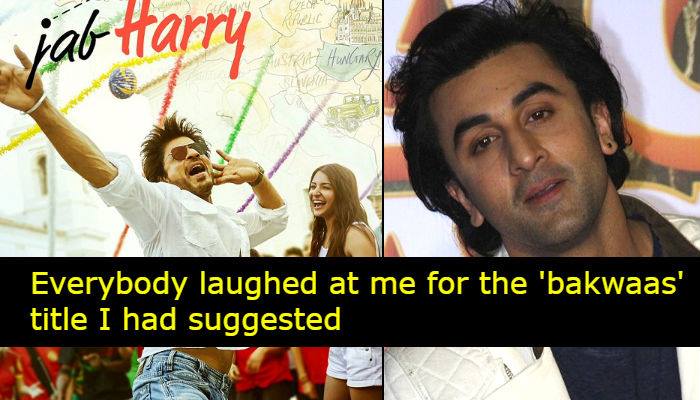 At the song launch of Galti Se Mistake from his upcoming movie Jagga Jasoos, Ranbir Kapoor said, “I am coming to Mannat (SRK’s residence), keep the Rs 5000 ready in cash! To be honest I was shooting at Mehboob Studio, where Shah Rukh Sir, Imtiaz Ali and Anushka were also shooting. We all were sitting in a van together and discussing various options for the title of the film, and I suggested this title (Jab Harry Met Sejal), everybody laughed at me for the ‘bakwas’ title I had suggested.”

But now Ranbir Kapoor has got his prize which he will have to share with Karan Johar. Here is the proof:

Jagga Jasoos we r quits now!!! Hisaab barabar. Give @karanjohar his share for the ‘Jab’ part in JHMS please. pic.twitter.com/gPtrUdwedD