Rajinikanth and Akshay Kumar starrer 2.0, directed by Shankar, had its grand first look launch the other day in Mumbai. The film which has been made on a huge budget is introducing some Hollywood-level technologies in India. And the entire team is vouching for the same.

The grand event was organised at the Yash Raj Studios and was hosted by filmmaker Karan Johar. However, the surprise element remained the entry of Salman Khan. The actor, who made a quick appearance at the event said that he wasn’t invited to attend the soiree but couldn’t stop himself when he came to know about it. Apart from Akshay and Rajinikanth, director Shankar, music director A R Rahman, sound designer Resul Pokutty and actress Amy Jackson were also present at the event.

Acknowledging Salman Khan’s effort for paying him a visit at the launch, superstar Rajini expressed how he’s eager to work with Khan. He said:

I would love to do a film with Salman the day he agrees to do the same. I am ready to work with him tomorrow. 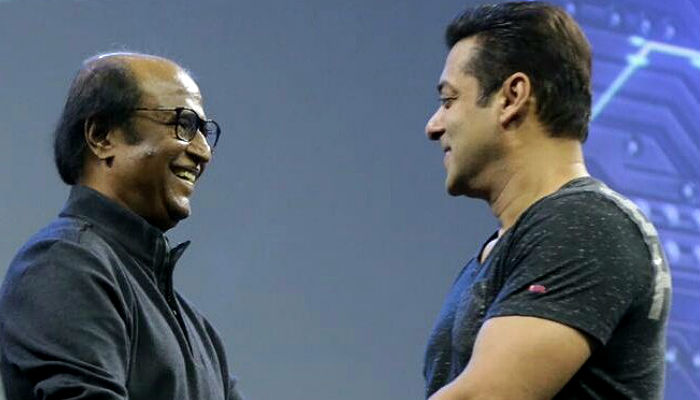 The Kabali actor was also full of praises for his co-actor, Akshay Kumar, who’s playing the villain in the film. Talking about how Akshay has given one of the performances of his lifetime, Rajini sir said:

The hero of 2.0 is not Rajinikanth but Akshay Kumar. Had I been given a chance, I would have taken that (Akshay’s) character. Hats-off to Akshay that he worked so hard. It’s a brilliant role. The whole country will be proud of Akshay.

The launch also witnessed some very interesting quotes made by Akshay Kumar. The actor talked about his experience of working with Rajinikanth in 2.0 and more. Here’re the four most important statements Akshay made at the first look launch event of 2.0. Take a look:

In my 25 years of career, I have never put make up but in this film, pure 25 years ka kasar (pura) hogaya. It used to take me three hours to put the make up on and another one hour to remove it. While they put make up on me, I used to watch so many movies on TV.

On his reaction when 2.0 was offered to him:

I am a patient guy and with this movie, I have become more patient. Thanks to Shankar and Rajini sir that they thought of me. I was shocked when they chose me to act with him.

On having Salman Khan with them:

I would like to thank Salman Khan for coming all the way from Bandra and make this occasion special.

Rajini sahab is not a superstar but a whole galaxy (in himself). He is the swag of industry. I still remember his film Baba had released and didn’t manage to do well at the Box Office. So he called all the distributors and gave the money back. That is the real picture of a superstar.

Also read: Gold: Director Reema Kagti on why Akshay Kumar and not Aamir Khan was her first choice for the film