The marketing campaign of Bank Chor has been pretty interesting with the team at YFilms adopting the unconventional route of film promotions by engaging in self-deprecating humour. Right from then ‘Bank Chor Trailer Spoof’ to Riteish Deshmukh and Vivek Oberoi getting roasted by the media, the film has managed to grab certain eyeballs. As it gears up for the release on June 16, Riteish Deshmukh reveals that the idea behind the marketing campaign was to get noticed amongst the big films like Tubelight and Baahubali 2.

The actor in an interview spoke to us about comedies in Bollywood, a biopic on Chhatrapati Shivaji and much more. Excerpts: 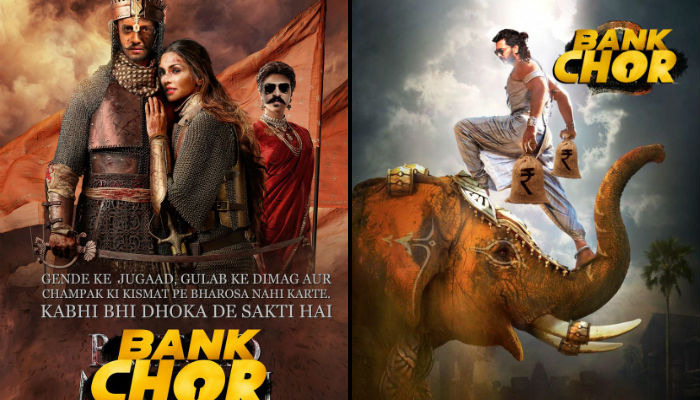 Bank Chor typically is a very small concept film, so the idea was to have a clutter-breaking promotional campaign. We needed something to stay afloat in terms of the bigger films that are coming. We had to leave a mark amidst the bigger films like Tubelight and Baahubali 2. This was a great approach to have a parallel promotion as to what will a Bank Chor do to promote his film. So we decided to steal the posters, trailers, and songs of other films.

As an actor, which is that one genre which excites you the most?
I enjoy films and don’t like to restrict myself to a particular genre. As an actor, when I am on a film set, my intent is to live the character. I have tried to get vulnerability in my character in Bank Chor. In this film, robbing is not for luxury, but to maintain his standard of living. We have improvised a lot in terms of humour and I really hope people catch those small nuances.

Do you feel it is easy for you to find success in the comic genre as compared to the other ones?
There are certain genres that work well but genres don’t guaranty your success. I was a part of a comedy film called Humshakals and that was a disaster. Genres don’t fail, films do. You cannot blame a genre for the failure of a film. If genres were responsible for a film to succeed, Ek Villain would have failed. Somewhere as a film, Ek Villain worked and Banjo didn’t work. In the same genre, Grand Masti worked and Great Grand Masti didn’t work, so films fail but genres always stick around. If once audience is used to watch you in a typical genre, you do get typecast. But then there are certain actors who keep reinventing themselves. I take great inspiration from Akshay Kumar, who I feel is phenomenal. He started with action followed by series of comedies then he went to action comedies and now he is on to relevant dramas. You see Rustom, Airlift, Toilet Ek Prem Katha), Padman and so many different films. People have accepted him as an action hero or a comic star, but still, he is taking so many risks, which is inspiring.

What is the status of Chhatrapati Shivaji Biopic? What would be the film’s budget?
We have just locked the screenplay of Shivaji and now we would move to the other aspects like VFX, what the costumes would be, and how the war scenes would be shot. There is a lot of work that would go into it and it is extremely premature to give out what budget that film would be made on.

After Baahubali 2, a lot has changed. Was there an improvisation in terms of pre-production of Shivaji to mount it on a humongous scale?
I don’t think we are approaching Shivaji keeping Baahubali in mind. Our intent is to make a film that stays true to the story because as a film, Baahubali can have the freedom to do many things because it was a fictional story. For Shivaji, I have to look at incidents that are documented and written. There are many stories floating around that may not be real, so all that work needs to be studied. We want to make this film with utmost respect, sensitivity and want it to be a film that probably makes people see the glory of the man.

Is Salman Khan a part of the biopic?
Yes, Salman Khan is a part of Shivaji and we are working on his character as well. But it’s too early to comment on it.

How do you see comedy as a genre? Do you think comedians in Hindi Film industry are typecast as secondary actors?
As far as I remember, in the mid-80’s, every film had a format. There used to be a hero, a heroine, a villain and a side track which was dedicated to comedy. There was a balance of laughter and emotion. Later on, it was decided to make that side track into a full-fledged genre. There were films like Golmaal, Chupke Chupke which were typical Hrishikesh Mukherji films. But the comedies that got made in 90’s were typical ‘on your face’ commercial comic entertainers. There was a phase when Govinda, Rishi Kapoor and Akshay Kumar acted in great comedy films. The mentality of comedy being secondary genre or a comedian being a secondary person to the lead actor does not exist anymore. The discrimination happens only in an award show wherein you have a different category for best actor in a comic role. I remember, Abhishek Bachchan was awarded best actor in a comic role for Bunty Aur Babli and he said ‘I thought I was an actor in the film’. If someone has to be fair enough, there has to be a category for best actor romance, action, drama or else just have one category which is the best actor.

Produced by Y-Films, Bank Chor is slated to release on June 16.

Also read: Baba Sehgal has performed a rap song for Bank Chor and it’s his craziest number till date