Through his Twitter timeline, Ram Gopal Varma is known to wade celebrities with his harsh words. The latest celebrity to become a victim of RGV’s words is Tiger Shroff. In a series of tweets, the director lashed out at Tiger for posing like actress Urmila. He called Tiger a bikini babe and said he should behave like a man.

The series of tweets started with a picture of Tiger from his film Baaghi in which he flaunted his chiseled body. On the picture, the words Happy Birthday Tiger Shroff, as it was the young star’s birthday yesterday.

Now, this photo may have prompted Ram Gopal Varma to go on a spree where he lashed out at Tiger. One of his tweets read, “If u don’t believe me ask @bindasbhidu who also is a huge Bruce Lee fan like me. Only gays pose like this and not men.” While his another tweet read, “Truly real men like Bruce Lee and @bindasbhidu never pose in a Urmilasih way”.

There were many tweets like this which RGV later deleted.

In the end, he tweeted, “Hey @bindasbhidu all my tweets on @iTIGERSHROFF are purely as ur fan and not otherwise ..please tell this to  @AyeshaShroff and him”, which might be seen as his attempt to control the damage.

Here are his tweets: 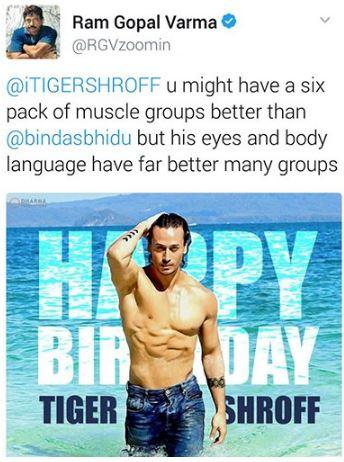 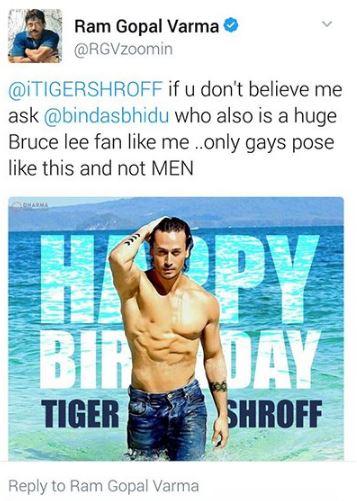 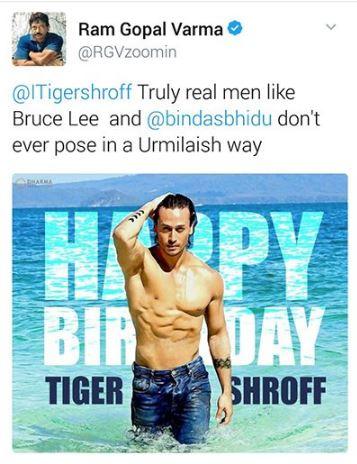 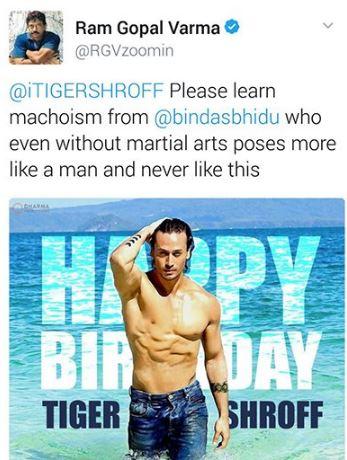 Hey @bindasbhidu all my tweets on @iTIGERSHROFF are purely as ur fan and not otherwise ..please tell this to @AyeshaShroff and him pic.twitter.com/9a53ogH4b9

Interestingly, Tiger’s father Jackie Shroff will be seen in RGV’s next film Sarkar 3. At the trailer launch, a few days ago, RGV and Jackie showed bromance. Given the equation he shares with Jackie, we wonder what led to RGV make nasty remarks about his son. If it were suggestions for Tiger, wouldn’t it be better if he would have avoided the social media platform? Only RGV knows the answer.