The Penguin Annual Lecture is delivered annually by either an eminent literary personality or a public figure who has literary credits. Priyanka Chopra has none. Her predecessors delivered lectures on the joy of writing and its importance, so it was incredibly confusing to listen to Priyanka talk without having picked up the pen yet.

If the intent was to talk about how the feminist movement defined the year that went by, could the same not have been delivered by successful authors like Arundhati Roy, Chikki Sarkar or even Soha Ali Khan who just recently published her memoir? Why invite a celebrity to talk about ‘breaking the glass ceiling’ when she herself doesn’t like using the term? Nonetheless, she talked about being fierce, fearless and flawed in a man’s world.

The Penguin Annual lecture 2017 by #PriyankaChopra on Breaking the Glass Ceiling – Chasing a #dream. If you can dream it, you can do it. @priyankachopra for being such a great inspiration for #women across the country! #India pic.twitter.com/Ue7dI7JweU

One of the most frustrating things about listening to her lecture and her conversation in the jam-packed Siri Fort Auditorium in Delhi was that Priyanka was constantly and incessantly interrupted. And mostly by men who either were more interested in seeing her than listening to what she had to say or wanted to outdo each other in asking her hand for marriage. If this is not manterruption, what is?

Priyanka Chopra recently became the only female to make it to the Forbes list of top 10 highest-paid Indian celebrities owing to her earnings through Quantico and Baywatch and endorsement deals. But her interviewer at the Penguin Annual Lecture in Delhi had only one question to ask — do the zeroes in the millions she earns matter to her? Priyanka, in turn, asked why the men are never questioned about the zeroes in their earnings?

ALSO READ: Priyanka Chopra’s mom discussing sexual harassment in the film industry is an example others need to follow

With a single reply, Priyanka laid bare the hypocrisy of how the earnings of male actors are seen as their entitlement as opposed to women who are depicted as breaking the glass ceiling.

“Why aren’t there other females on the list? Why is there only one female actor on the list despite there being so many [actresses] in the industry?”

The topic of conversation was ‘Breaking The Glass Ceiling’, or at least that was it was supposed to be. The conversation inevitably turned to Padmavati and Priyanka was asked why the film industry, even though supported Sanjay Leela Bhansali privately, was publicly silent.

“Because when you put my name or a public person’s name onto your ticker, people watch it. So we are used…why is this question not asked to the politicians or the government who is actually responsible for it?” 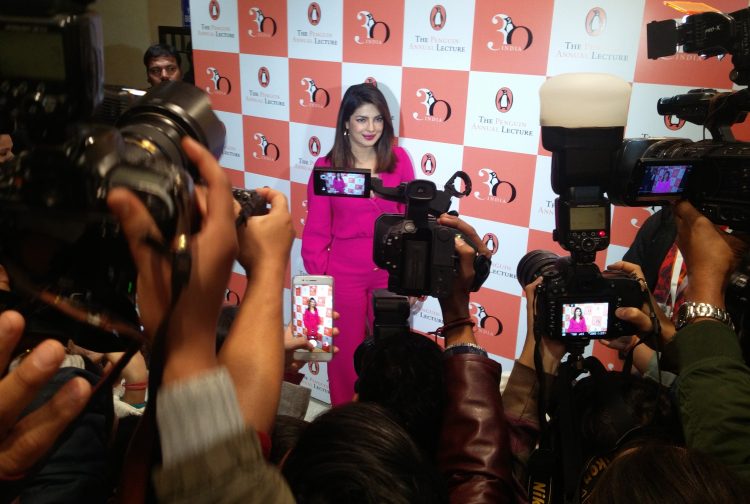 Priyanka called out why celebrities in the public eye were always made political scapegoats and their statements sensationalized while those accountable for dealing with the relevant issues were left unscathed.

ALSO READ: Chanda Kochhar to Priyanka Chopra: A look at the Indians on Forbes’ list of 100 Most Powerful Women

Though Priyanka has been involved with her own production house, the last film in which she starred released over a year ago. So the obvious question that came her way was whether doing projects in Hollywood meant that she had outgrown the Hindi film industry.

“What was Hrithik’s last film or Ranbir’s? Nobody is asking the boys that question. They get the opportunity to take time to find the right film for them and come into a movie after four years and no one asks their relevance. Why should my relevance be any less if I take my time?”

Are actors asked the same questions as the actresses are? Are women seen through the same lens as men are? If the idea is about being intrusive, why is there hesitation when it comes to holding male figures accountable and an unchecked resolve when the same questions are put to women? The answer perhaps lies in the construct of our society. Men are more or less expected to be the bread-winners. That however they earn and whatever they earn, they anyhow have to. While women, even those who are actually taking the lump sum of responsibilities, are expected to play second fiddle.

During her lecture, Priyanka talked about being fierce, fearless and flawed. But perhaps what is flawed is the distinction through which the cameras, the interviewers and the society in general view men and women, actors and actresses. There needs to be a realization that public figures are not public properties, and it needs to come immediately.