Parineeti Chopra finds herself in an unwarranted controversy due to a recent statement she made at an event dedicated to empowerment of women through martial arts. An interaction that was meant to sensitize young girls on the importance of self-defence, has turned into a debate on the economic status of Parineeti Chopra’s family when she was studying in Ambala as a kid.

On 21 May, 2017 Parineeti spoke about the kind of hardships she apparently faced as a child. The actress recalled how she had to ride a cycle to her school because her family didn’t have enough money. She said: “I am from a very small city, Ambala. I had two brothers growing up and we had a lot of difficulties. We didn’t have any money for a bus ride. We didn’t have a car or a driver. I used to fight with my mom and dad saying why do I have to cycle to school every day.”

What was trying to highlight with this story was how she used to be harassed by boys while on her way to school because she wore a skirt. But what stayed with the audience is her claims that she didn’t have enough money even to afford a bus ride to her school. This had appealed many on social media.

On 30 May, 2017 the statement was contradicted in the harshest language by someone by the name Kkanoo Gupta, claiming to be the actress’ school mate from Jesus and Mary: “Parineeti Chopra shame… coming from a privileged background and lying through the teeth in front of the camera. I guess this is what being a celebrity means. Create a fabricated sob story of no money no car etc. Coming from the same school I probably also remember the car her father used to have. And going to school on a cycle was a trend those days and also a privilege not every one had. My friends from CJM would probably understand the lies a bit better.”

Later, Chopra clarified: “I know I said this even that day but somehow it’s been misconstrued, about something very irrelevant about me having a car or not!! I was talking about using a car and driver to go to school that’s all. The essence of what and why I was giving that example was completely lost.”

We do not know whether Chopra was concocting a sob story, as alleged by the so-called classmate, or it was a mere a slip of tongue. However, with her statement, Chopra has exposed her extremely poor understanding of poverty or the state of being poor. She studied in Jesus and Mary school in Ambala, which by no means can be afforded by someone who is poor. She did an Honours Degree in Business, Finance and Economics from Manchester Business School, Manchester, England. May be she got a scholarship. But still, even to sustain yourself as a student in a foreign land, one needs to good financial backing. During her stint at the Manchester Business School, Parineeti had worked part-time as the team leader of the catering department of the Manchester United Football Club, an instance that has also been used by the actress to describe her penury on many occasions. She had said that she used to serve coffee during her studies to earn some extra bucks. This again is not a great example of being poor. One would say, yeah she struggled, like many of us do. But certainly, she wasn’t poor – a picture she apparently tried to paint with her statement “we didn’t have enough money”. Chopra’s blissful ignorance about what not having enough money stands for, is symptomatic of the incredible aloofness of the privileged and the rich in understanding the ground realities in India.

“I am from a very small city, Ambala. I had two brothers growing up and we had a lot of difficulties. We didn’t have any money for a bus ride. We didn’t have a car or a driver. I used to fight with my mom and dad saying why do I have to cycle to school every day.”

What her alleged classmate from Jesus and Mary claims:

Coming from the same school I probably also remember the car her father used to have. And going to school on a cycle was a trend those days and also a privilege not every one had. My friends from CJM would probably understand the lies a bit better.”

Also read: Parineeti Chopra’s former classmate slams her for lying about being poor in a strong worded Facebook post

Hopefully after this fiasco, Chopra junior will google poverty in India and get an online tour of what being poor in this country means. 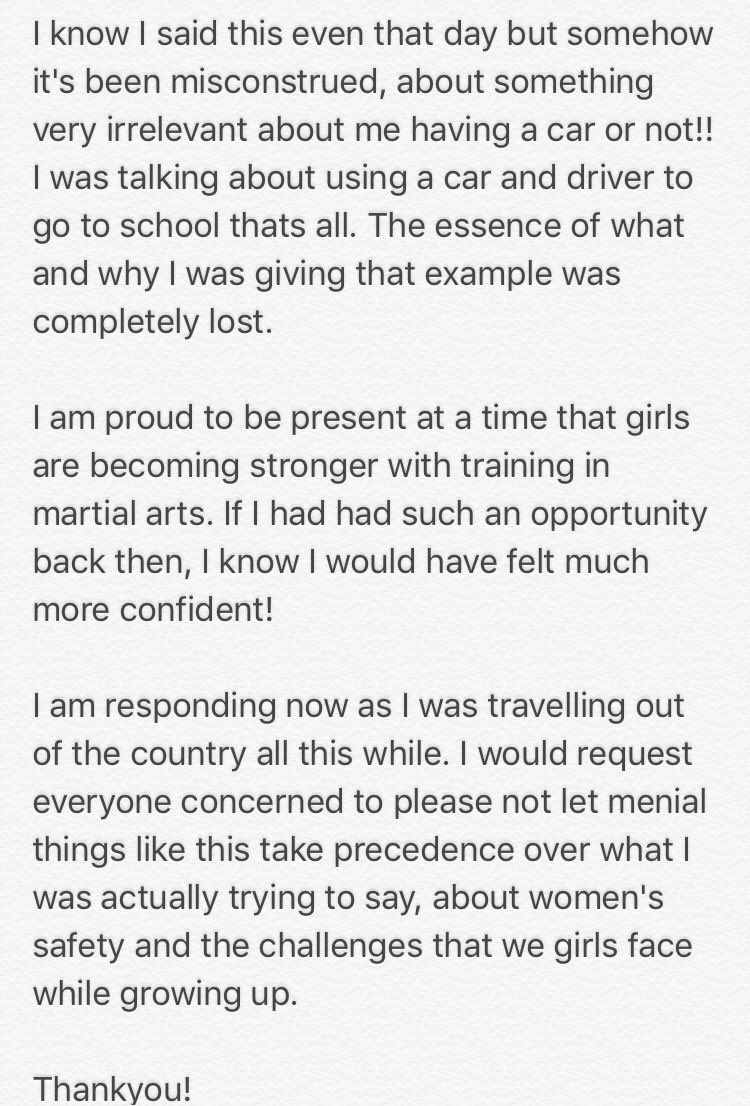 To begin with, we can give her the accepted definition of poverty in India. Poverty in India is measured by the poverty line which defines the daily purchasing power of a citizen. In the 1970s it was fixed at Rs 2 and Rs 2.3, respectively in rural and urban areas. Right now, India doesn’t have an accepted poverty line. What was accepted till a couple of years back was the figure set by the Tendulkar committee. It had set a threshold of daily per person expenditure of Rs 27 and Rs 33 in rural and urban areas.  This means if a family had five members, they should be able to spend more than  Rs. 4,080 in rural areas and Rs. 5,000 in urban areas to be able to make it beyond the poverty line.

However, due to such a low benchmark, there was widespread outrage against it. In 2014, the Rangarajan committee raised these limits to per capita expenditure of Rs 32 and Rs 47, in rural and urban areas respectively. However, the figures were still not considered respectable enough. These figures left 30 per cent of the Indian population below poverty line. According to the international norm, the poverty line should stand at something around an expenditure power of Rs 120 daily. The Narendra Modi government hasn’t accepted the line set by the Rangarajan committee and a 14-member task force under NITI Aayog’s vice-chairman Arvind Panagariya is working on it.

Even by conservative estimates, Parineeti’s pocket money as a kid would have more than any of these figures mentioned above. Those living below poverty line are also hugely malnourished and the government provides them subsidised food grains. They stand in lines for hours to collect their share of food grains. Access to school, medical facility, occasional recreation is not a reality for them. Mostly, these people are daily wage earners – who work either at the lands of other farmers or as construction workers. Even for people living above the poverty line, life is no bed of roses. Perhaps, by the definition of the poverty line, even a rickshaw puller in Mumbai or Delhi will not be considered poor.  With these facts Chopra would perhaps rectify her understanding of what being poor entails.

Being poor entails severe physical hardship, constant financial insecurity, struggle to meet ends and debt crisis. One death in family, one major illness of the earning member of the family can forever break their backs for generations to come. It also means, killing ones wishes everyday, watching other people live a comfortable life, while chasing a better life. And what being poor doesn’t stand for sure is “wearing a skirt” and going to a convent school in  a “small town” like Ambala, ” riding on a bicycle” while being followed by a dotting father to protect her from being eve-teased.