Salman Khan’s Eid celebrations turned sour with the disappointing run of Tubelight at the Box Office. The Kabir Khan directorial has managed to cross the Rs 100 crore mark but it is nothing to be happy about. It should be considered a flop as per the 51-year-old actor’s stardom. He has decided to compensate the distributors to the tune of Rs 55 crore.

In the recent years, Salman has enjoyed a stupendous run at the Box Office, with most of his films shattering records one after another. But he has witnessed bad times when his ventures nosedived at the Box Office. In fact, he has witnessed more flops than other Khan peers Shah Rukh and Aamir. Still, his fans flocked to the theatres on the day of release and that has helped him to bounce back.

Here we take a look at Salman Khan’s biggest flops in the past 10 years. The figures have been compiled from Box Office India and are net gross figures for each film. While Salman has got blockbusters like Bajrangi Bhaijaan, Sultan and Dabangg 2 in his kitty, the actor stood silently as big budget flicks like Yuvvraj, Main Aurr Mrs Khanna and London Dreams. 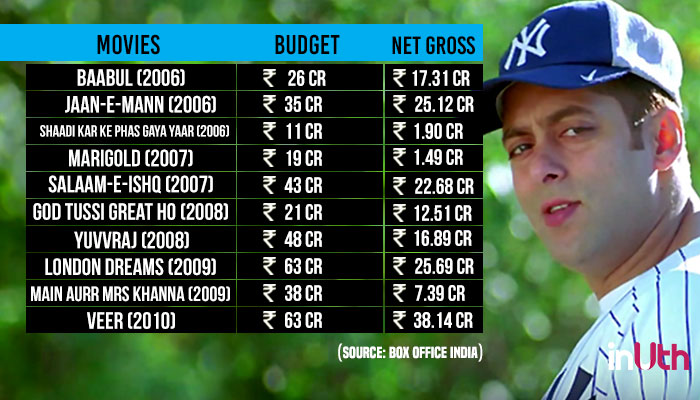 According to Box Office India, Subhash Ghai’s 2008 dud Yuvvraj was made at a budget of Rs 48 crore. Despite having an ensemble cast comprising Salman, Anil Kapoor, Katrina Kaif, Zayed Khan and Mithun Chakraborty, the emotional drama could garner a mere Rs 16.89 crore.

Also read: Sorry Salman Khan, your stardom would remain intact even without these 7 films

Similarly, Salman Khan and Akshay Kumar shared the screen space with Preity Zinta in Shirish Kunder’s 2006 directorial Jaan-E-Mann. The film clashed against Shah Rukh Khan starrer Don: The Chase Begins Again that turned out to be a commercial success. That was the last instance when both the Khans clashed at the Box Office.

Now, the fortunes have changed as Shah Rukh Khan has lagged behind the Dabangg actor in terms of Box Office clout. We are happy that the latter has put his past behind and choosing films as per his target audience. It should be seen whether Salman learns his lessons from Tubelight.