Member of Nationalist Congress Party (NCP) Vidya Chavan has asked Bollywood filmmaker Ram Gopal Varma to apologise for his women’s day tweet on Sunny Leone or get beaten up with shoes.

Ram Gopal Varma who drew flak for his sexist comment om Sunny Leone has invited criticism from several quarters with 52,000 members of the powerful Film Studio Setting & Allied Mazdoor Union have deciding him to boycott him for his statement.

While people across the country including the members of the film fraternity went to share inspirational quotes and videos, Ram Gopal Varma decided to put up an insensitive and insulting tweet saying, “I wish all the women in the world give men as much happiness as Sunny Leone gives.”

He should apologise for his remark, if he doesn’t we will try to beat him with shoes: Vidya Chavan, NCP on Ram Gopal Varma pic.twitter.com/G54Zhcy6Fa

He further tweeted, “Is there no Men’s Day because all days in the year belong to only men and the women were given just only one day.” “I don’t know what men should be doing to women that day but I wish one day in year is celebrated as Men’s Women’s Day,” he said in another tweet.

RGV’s tweet also landed him in legal trouble after a Goa-based female activist filed a police complaint against the filmmaker.

Sunny Leone, however, gave him a befitting reply without actually saying much. 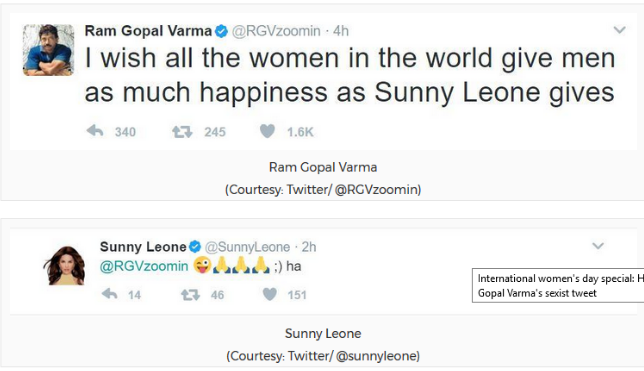 It must be noted that it was not the first time that Ram Gopal Varma found himself on the receiving end. He has found himself in the limelight for his other cryptic tweets in the past as well.