Taapsee Pannu starrer Naam Shabana witnessed a less than decent opening at the Box Office on the first day of release. The film registered 15-20% occupancy on Friday and might earn somewhere around Rs 4-6 crore. The film which is a spin-off of Baby did not witness the opening of the 2015 film. In Naam Shabana, Taapsee essayed the role of secret agent Shabana Khan and traced her journey from girl-next-door to a fearless spy.

Naam Shabana released in 2100 screens and the numbers are definitely disastrous. The film was largely promoted as Taapsee’s film and the prequel of Baby. But even this did not help the movie attract cinema-goers to theatres. With these numbers, the film is expected to earn Rs 12 crore in the first weekend. 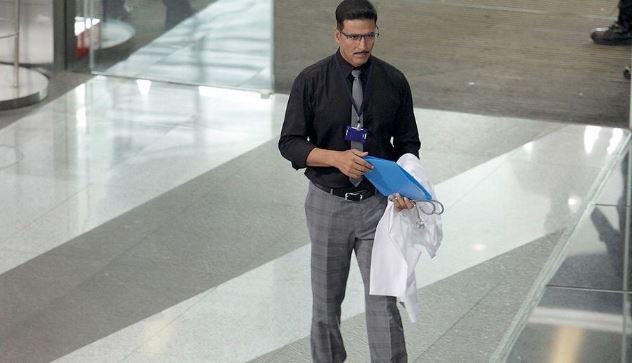 Akshay Kumar in a still from Naam Shabana (Courtesy: @Akkistaan)

This Shivam Nair directorial was made on a budget of Rs 35 crore, reportedly. This cost includes the cost of print and advertising. But, looks like the film will have to go through a rocky path before becoming a hit.

Though celebs who watched the film loved Taapsee’s role the critics weren’t too impressed. Many were of the opinion that the film was wasted attempt and even performances of Anupam Kher, Manoj Bajpayee, Prithviraj Sukumaran and Danny Denzongpa couldn’t save it.

Also read: Cinema A to Z: All you need to know about Taapsee Pannu-starrer Naam Shabana

However, Taapsee’s performance was lauded by critics as well and they called her the saving grace of the film. It was the sloppy and predictable plot that did not garner Naam Shabana good reviews.

Also read: From Taapsee Pannu’s Naam Shabana to Salman Khan’s Ek Tha Tiger, here are 7 spy-thrillers which should not be missed

Taking to Twitter yesterday, Akshay Kumar had said that Taapsee was the hero of the film and urged everyone to watch it. In Naam Shabana, Akshay also has an extended cameo and his camaraderie with Taapsee was liked by viewers. Let us see how the movie fares at Box Office in the coming days and if Naam Shabana comes even a little close to Baby’s success.

#NaamShabana starts well for @Taapsee, collects 5.12 cr on Friday. All eyes on the Saturday and Sunday numbers now.